In late December, three dozen avid birders set out on a mission: to count every bird they saw or heard within a 15 mile radius of Bigfork. They covered an area that stretched from the north end of Flathead Lake, down to Woods Bay and over toward Creston. Small groups of avian enthusiasts drove from morning to night, logging and identifying any bird they came across.

“It gives us a handle on the general trends of birds, so the Christmas bird count is a wonderful tool for us to analyze bird populations overall -- not in a short-term, but in the long-term,” said Bigfork count organizer Craig Hohenberger.

The Christmas bird count got started 47 years ago locally, but the tradition dates back to the 1900s. Hunters used to hold Christmas side hunts and competed to see who could bring in the largest pile of birds. Concerned by the carnage, ornithologist Frank M. Chapman decided to host an alternative event focused on species conservation and on Dec. 25, 1900, the Christmas Bird Census was born. Today, tens of thousands of birders participate in counts across the country from Dec. 15-Jan. 5. In Flathead County, counts are orchestrated by the Flathead Audubon Society which holds counts in eight regions, including Bigfork, Glacier National Park and Eureka, among others.

Hohenberger said volunteers tallied 77 species and approximately 12,500 birds in and around Bigfork. Numbers are unofficial, he noted, as he’s still receiving data. Notable feathered friends were the Cackling Goose, a small Canadian goose; a brown-headed cowbird and a number of waterfowl and hawks.

While this year’s avians didn’t include any major standouts, the count two years ago was a different story.

“Nothing really unusual this year,” Hohenberger noted. “Two years ago we broke all records with 98 species of birds in the Bigfork count.”

This year’s overall number of birds was also on the low-end of the spectrum, which ranges from 12,000 to 22,000. Hohenberger said weather was to blame — in colder years with more snow on the ground, birds tend to concentrate. However, this year, birds were spread out over the open landscape.

Bird populations are decreasing locally and across the United States. Research published in the journal, Science in September 2019 shows that birds have declined by almost three billion since 1970. More than 90% of the losses are from common birds like finches, sparrows and blackbirds, according to Living Bird Magazine.

“These bird losses are a strong signal that our human-altered landscapes are losing their ability to support birdlife,” Cornell Lab of Ornithology conservation scientist Ken Rosenberg told Living Bird. “And that is an indicator of a coming collapse of the overall environment.”

“In my lifetime I’ve noticed a lot of birds declining, especially birds in wetlands and grasslands areas where the habitat was destroyed,” he said.

Habitat loss is one factor, but other bird killers are herbicides and pesticide, feral cats, power line and building collisions and storms, of which the Bigfork area saw several this past fall.

While populations aren’t what they once were, Hohenberger still finds plenty of avians to observe.

“I go out almost every day and bird watch and all my friends are birders, more or less,” he said.

Hohenberger got the birding bug after venturing to California with a friend in high school. The pair identified 50 species during their trip to the Tule Lake National Wildlife Refuge and “we were hooked.” Hohenberger went on to earn a degree in zoology, taught science for more than 30 years and has gone birding in far-off locales like Costa Rica and Belize.

“It’s easy to do,” he said. “All you need is a pair of binoculars and a bird book and off you go.” 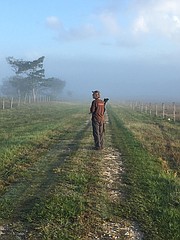 Craig Hohenberger bird-watches during a trip to Belize. He recently led the Bigfork-area Christmas bird count that the Flathead Audubon Society holds each year. Local birders counted more than 12,000 birds in and around Bigfork alone. Courtesy photo 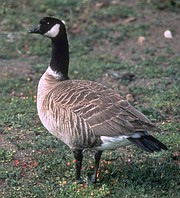