The Valkyries soccer squad opened the season with a strong performance at home Saturday as they fought perennial powerhouse Whitefish to a 4-4 tie.

Led by a hat trick from Calista Worble, the Vals jumped out to a 3-1 lead before seeing the Lady Bulldogs storm back to take a 4-3 lead at the half. The Vals scored the only goal of the second half, holding Whitefish scoreless to earn the tie.

“We had several kids playing their first high school game ever and we just needed to get some experience,” head coach Tim Guenzel said. “To have a performance like we had today against a team as good as Whitefish is very exciting. I was impressed with the adjustments we were able to make after halftime. We came out and played a great second half.”

Whitefish’s Emma Barron got the scoring started with a goal early in the first half, but the Vals answered with goals from Worble and Danika Bucklin to grab a 2-1 advantage. Worble’s second goal put Bigfork up 3-1 but goals by Barron and Sofie Saurey tied things up at 3-3 before a penalty kick by Barron found the back of the net to put the Lady Bulldogs up 4-3 just before the break. Worble answered with a slicing shot from the right side early in the second half to score the final goal of the game.

After the game, Guenzel was full of praise for his young squad.

The Vikings opened the season with a hard-fought loss to the defending state-champions Saturday, falling to the Bulldogs 3-1.

“I think we played a good game today, but we obviously have a lot of work ahead of us,” head coach Joel Fetveit said. “we are a young team with a lot of freshmen who play well together. Starting the season against a team like Whitefish is tough, but I think we have a lot of potential.”

Whitefish got on the scoreboard first in the game’s fourth minute as Gabe Menicke used a header to knock in a shot that had ricocheted off the crossbar of the Bigfork goal. Niath Edland put the Bulldogs up 2-0 before Ben Pilskalns put the Vikings on the board with a long free kick that found its way to the net.

Whitefish’s Brandon Mendoza scored the final goal of the game on a breakaway in the 72nd minute as Whitefish got the win.

The lone goal for the Vikings came on just three shots while the Bulldogs kept Vikings keeper Caden Riedesel busy with 15 shots on goal and seven additional off-target shots. Riedesel recorded 10 of his 12 saves in the second half.

Both the Vikings and Valkyries are on the road at Stevensville Thursday before hosting Corvallis Saturday. 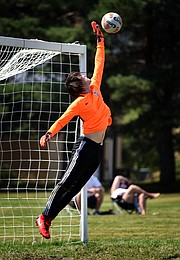