Bigfork’s got talent and acts of all ages will be taking the stage this weekend to showcase their singing, dancing and gymnastic skills as part of the 18th annual “Cowabunga: Cow-vid-21: Salute to Our Heroes” talent show. Funds generated from the event support the ACES After-School Program and the Bigfork Playhouse Children’s Theater, making it possible for both organizations to keep program fees affordable for participants.

This year’s showcase features performances from community members ages six through 70, including special routines by Bigfork Dance, Bigfork ACES and the Bigfork High School cheerleaders. In addition to group routines, the show will also feature a piano duet, flute solo and coronavirus-themed skits on topics like Zoom meetings.

“It’s harder and harder every year to come up with anything that’s cow-related, but this one just kind of fell into our laps,” said theater associate producer Brach Thomson of the “Cow-vid” theme. “Let’s not make light of the people that lost their lives and the hardships, but let’s make fun of wearing a mask …. Let’s have as much COVID humor as we possibly can to hopefully just lighten the load.”

Thomson is looking forward to the uniqueness of the event. Cowabunga brings people of all ages, backgrounds and talents to a single stage.

“It’s just such a good show to bring new people in the door,” he said.

And the event is an important fundraiser for the children’s theater, which will perform four plays this fall, in addition to summer workshops and a springtime end of the year concert, which will be held at 7:30 p.m., Tuesday, May 4. Their big productions carry hefty price tags -- they might dish out $4,000 in royalties alone -- to bring a show to life.

Last year’s lineup was called off due to the pandemic, but thankfully, they were able to apply their royalty fees to this year’s season instead. Fall productions will include “Lion King Jr.”, “Elf”, “Aladdin” and “Disney’s Descendants.”

“That’s the hope, is that we can just keep moving forward,” Thomson said. 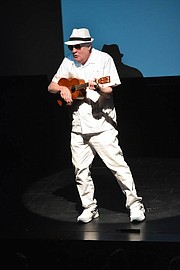 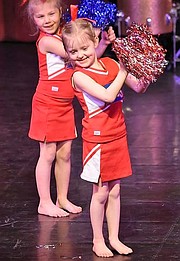 “Cowabunga” will be an integral step forward for the ACES After-School Program, too. ACES relies on donations from the community to support their after school programs which provide care for dozens of local children during the school year and summer months. Their summer camps opened two weeks ago and are already full with 75 kids, plus more on waiting lists.

Last September, ACES received a $211,000 CARES Act grant, but Hay said ACES had to spend the money in a four-month time frame and couldn’t use the funds for operating expenses. Instead, the program allocated those funds toward infrastructure improvements, like building a new bathroom and buying a 15-seat bus, along with COVID-19 cleaning supplies and covering tuition for that four-month period.

“Nobody paid one penny to come to ACES,” she said.

She hopes “Cowabunga” can generate funds to support ACES’ operations and also serve as a lighthearted experience for all who attend and perform -- especially since last year’s show was canceled.

“We’re hoping to kick off the entire theater season with some fun and local talent. We just want people to come have fun and see that maybe there is a light at the end of the tunnel,” Hay said.