Colin Wade brings the ball up the court in the fourth quarter against Eureka Thursday. Jeremy Weber/Bigfork Eagle

Levi Taylor battles his way inside for a tough two points against the Lions Thursday. Jeremy Weber/Bigfork Eagle

Isak Epperly glides in for a layup against the Lions Thursday. Jeremy Weber/Bigfork Eagle

The Vikings picked up three wins last week and one Monday as Bigfork pushed its winning streak to nine games with victories over Columbia Falls, Eureka, Thompson Falls and Loyola.

A 20-6 third-quarter run was the difference Tuesday as the Vikings took down the Wildcats in Columbia Falls, 64-52. Walker Fisher led the Vikings with 22 points in the win and Isak Epperly added 17 as Bigfork held the Wildcats to just 3-23 shooting from three-point territory. The Vikings put in seven of their 15 shots from three as they took down the Class A opponent.

Bryce Gilliard scored six in the fourth quarter and Epperly added five Thursday as the Vikings turned up the pressure in the final eight minutes to down visiting Eureka 54-45.

Tied at 23 at the half, Bigfork took a 36-34 lead into the fourth quarter before using a swarming full-court press to disrupt the Lions in the final minutes. Gilliard finished with 11 to lead a balanced Vikings scoring attack as Fisher added 10, Epperly scored nine and Cormac Benn, Levi Taylor and Colin Wade each scored eight.

Gilliard scored nine of his game-high 21 points in the opening eight minutes Saturday as the Vikings jumped out to an 18-12 lead at Thompson Falls. In a battle for sole possession of first place in the conference, the Vikings led the Blue Hawks 38-31 at the half and wound up winning by the same margin, 67-60.

The Vikings led Loyola 38-33 after three quarters Monday but again turned up the pressure in the fourth quarter to pull away for a 60-44 victory.

Gilliard scored 10 in the opening quarter and another 10 in the fourth to finish with 24 points to lead Bigfork while Epperly added 13 points, Taylor had nine, Benn scored six, Wade had five and Nick Walker finished with three points.

The Vikings will be in action again Saturday as they travel to Anaconda.

A valiant effort by the Valkyries came up just short Tuesday as Bigfork fell at home to undefeated Columbia Falls, 56-51.

Trailing most of the game, the Valkyries battled back to take a 45-44 lead on an Emma Berreth three early in the fourth quarter and later led 48-46 after a pair of Lexi Saari free throws. Columbia Falls regained the lead on a three by Maddie Robison with 2:23 to play, but Saari answered with a three of her own to put the Valkyries up 51-50 moments later. A pair of Grace Gedlaman free throws gave the Wildkats the lead for good with 1:55 to play.

The Valkyries fell behind the Lady Lions 33-14 at the half in Eureka Thursday and never recovered as Bigfork fell 56-34. Nadeau scored 16 in the loss while Berreth finished with 12, Callie Gambala scored three and Arianna Saari had two points.

Berreth scored 25 and Martinz added 10 at Thompson Falls Saturday, but it was not enough as the Valkyries fell to the Lady Blue Hawks, 60-53.

Down 13-7 after one quarter and 34-24 at the half, the Valkyries couldn’t recover as Thompson Falls held on for the win. Nadeau scored seven for Bigfork, Lexi Saari had six and Buenz and Chappuis each scored two points.

The Valkyries were back in action after press time Tuesday as they traveled to take on Loyola in Missoula. The team will be at Anaconda Saturday.

Ryder Nollan and Traic Fainter each went 3-0 last week and Isaac Bjorge was 3-1 as the Vikings wrestling squad picked up a pair of dual wins over Whitefish and Browning and also saw action at a mixer in Arlee.

Fainter opened the week by pinning Clark Fork’s Ryder Hansen in 1:08 and Michah Acaker in 2:42 in Arlee Thursday before pinning Browning’s Chris Hall in 2:44 Friday.

Nollan pinned Arlee’s Drew Knoll in 1:18 Thursday before earning a 10-6 decision over Browning’s Quenton Campos and a 6-1 win over Whitefish’s Carter Moran Friday.

Bjorge split his matches at Arlee Thursday, falling to Clark Fork’s Chandon Vulles in 1:00 before pinning Jaxon Green in 43 seconds. He picked up a pair of wins in Whitefish Friday, a 12-5 decision over Browning’s Brendon Whiteman before pinning Whitefish’s Ashton Akey in 1:50.

The team was at Eureka after press time Tuesday and will be at Plains Saturday.

113 Json Merringer (B) won by Forfeit

120 Angus Anderson (B) won by Forfeit

170 Joseph Farrier (B) won by Forfeit

120 Angus Anderson (B) won by Forfeit

152 Patrick Wallen (B) won by Forfeit

The Valkyries 200 medley relay team of Sydney Slawter, Allie Reichner, Sophi Logue and Shelby Thompson shaved 11 seconds off their season-best time to finish sixth at the Missoula High School Invitational last week while Soraya Brevik took six seconds off her best time in the 200 freestyle to move into contention for a spot at the state meet. 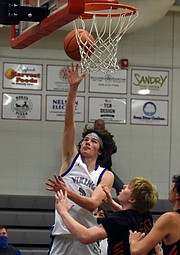 Isak Epperly glides in for a layup against the Lions Thursday. Jeremy Weber/Bigfork Eagle 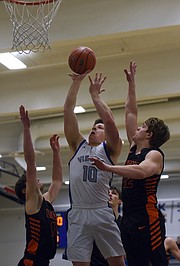 Levi Taylor battles his way inside for a tough two points against the Lions Thursday. Jeremy Weber/Bigfork Eagle 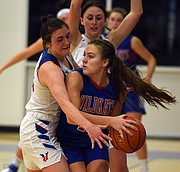 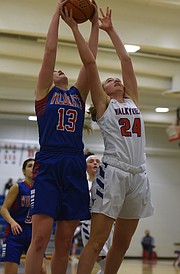