Another week full of Vikings and Valkyries sports saw the Bigfork wrestling team improve to 7-1 this season after sweeping all four home duals over the weekend while the Valkyries basketball team split games with Thompson Falls and Florence. The Vikings basketball squad dropped a tough game to Thompson Falls Tuesday before seeing their weekend matchup with Florence cancelled by COVID-19. The swim team’s scheduled meet in Polson was derailed by pool maintenance issues. 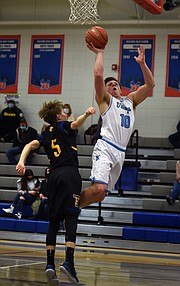 The Vikings wrestling team is off to its hottest start in years as Bigfork swept all four home duals Friday and Saturday with wins over Eureka, Superior, Choteau and Plains/Hot Springs. Angus Anderson, Shelton Woll and Vaughn Pendlay each went 3-0 over the weekend while Joseph Farrier and the team’s newest member, Isaac Bjorge, both went 3-1.

“I can’t remember the last time Bigfork was able to compete with Eureka and Superior as a team, so those were big wins for us this weekend,” head coach Shawn Hall said. “It should really build some momentum for us.”

Hall said the addition of Bjorge, who earned all three wins this weekend by fall, will help round out a Bigfork lineup that was already on a roll.

“He was a basketball player until this year and he is definitely going to help us out. He’s going to really help us solidify the upper weight classes,” Hall said. “If everyone stays healthy, we should be in really good shape for the rest of the season.”

The team is scheduled to be in Florence Wednesday and at Shelby Saturday.

The Valkyries opened the week with a 67-51 home loss to Thompson Falls Thursday night but bounced back with a gritty 56-51 victory over Florence Saturday.

Bigfork and Thompson Falls were knotted at 14-14 after one quarter Thursday, but 29 turnovers and missed scoring opportunities were too much to overcome as the Lady Blue Hawks pulled away over the final three quarters to win by 16.

“We had plenty of steals against Thompson Falls, we just couldn’t convert them into points,” head coach Cortnee Gunlock said. “We would get the steal and then either turn it over ourselves or miss point blank shots.”

Emma Berreth had 17 points to lead Bigfork in scoring in the loss while Madison Chappuis added nine points and nine rebounds and Alexis Saari also had nine points. Callie Martinz had seven points, Jessa Newton added three, Audrey Buenz and Callie Gambala both scored two and Arianna Saari and Scout Nadeau each had one point.

Berreth scored 11 of her game high 26 points in the fourth quarter against Florence Saturday as the Valkyries pulled out a 56-48 win.

“This was the first game of the season where she shot well from the outside, which is very beneficial for our offense,” Gunlock said of Berreth’s performance. “She was able to knock down some threes and that really helped us.

Bigfork trailed 41-40 heading into the fourth quarter, but Berreth’s 11 points, coupled with five from Nadeau, helped the Valkyries outscore Florence 16-7 over the final eight minutes to earn the win as the defense turned up the intensity.

“They broke the press pretty easily and our half-court defense was struggling at times, but Madison Chappuis came up with two big steals down the stretch when we needed them and we got the win,” Gunlock said.

Nadeau had 14 points in the win while Chappuis added nine, Alexis Saari scored three and Buenz and Martinz each had two points.

The Valkyries have a full week of games ahead of them as they took on Mission after press time Tuesday and will host Eureka Thursday before traveling to Troy Friday and Deer Lodge Monday. 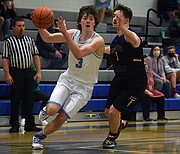 The game was close through much of the first quarter before Thompson Falls used a late run to grab a 23-13 lead after eight minutes of play.

The Vikings trailed 41-32 at the half, but fought their way back to pull within seven in the third quarter on a three-point play by Nick Walker.

Bigfork continued to cut into the Blue Hawk lead in the fourth as free throws by Walker Fisher and layups by Levi Tayor and Cormac Benn cut the Thompson Falls lead to 65-62 with under five minutes to play.

The Blue Hawks answered with a quick 5-0 run to push the lead back to eight as Thompson Falls held on to win by six. 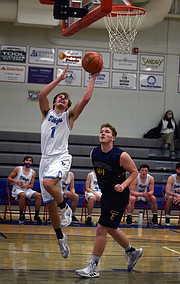 “We did a lot of really good things on offense, but just didn’t guard anybody all night,” head coach John Hollow said about the loss. “I really like where we are at on offense and we are doing a lot of good things on that end of the floor. We need to take care of the ball, though. Our defense just has to get a lot better. They are a good team that played well and shot the ball well against us. We didn’t necessarily play as well as we could and yet we still had a chance to win at the end of the game.”

The Vikings will be out of action this week as several players tested positive for COVID-19 after being exposed in the team’s game at Deer Lodge earlier this season. If all goes well, the team will be back in action at home against Stillwater Jan. 26.