Ryan Nollan climbs over a wall obstacle during a Spartan Race. Courtesy photo

Ryan Nollan competes in a Spartan Race. The new head cross country coach has been participating in Spartan Races for the past seven years. Courtesy photo

Running has been an integral part of Ryan Nollan’s family ever since he can remember.

Bigfork’s new head cross country coach grew up running races in his native Washington and supporting his sister’s marathon endeavours along the west coast. And yes, they were exactly the type to get up early on a holiday morning for a family 5K.

More recently, Nollan’s athletic focus has shifted elsewhere — to Spartan Races, which he competes in with his son, and a few years spent coaching Bigfork’s junior high football team.

“I think it’s a good avenue for kids to learn about life,” Nollan said of the sport. “I tell the kids, someday you’re going to be up at 3 a.m. with a screaming baby and right now is when you start getting tough enough to do that. It’s just a stepping stone for them to get ready to be adults.”

In cross country, athletes run three-mile courses on varying types of terrain, ranging from groomed golf courses and asphalt to hilly, wooded trails. Nollan is looking forward to helping his athletes set goals, navigate challenges and work through the ups and downs that come with competition. He spent the spring season helping to coach the long-distance track athletes including sophomore standout, Jack Jensen, who took fifth at state in the mile. Other runners to watch include senior Elliot Sanford who’s been busy logging miles this summer — upwards of 40 a week.

“He went under 5 minutes for a mile, which is pretty fast,” Nollan noted.

This year’s boys team is poised for success. For one, with a dozen runners, they have enough athletes to meet the five runner minimum required to score points at meets. And two, the Vikings have both speed and motivation on their side.

“We’ve got seven boys that are pretty fast,” Nollan said. “If we work hard, what opportunity could we have at the state meet? We might place in the top five.”

The team runs together at least once a week over the summer, while official practices kick off Aug. 13.

Nollan stressed that for athletes to do well this season, they’ll need to come to that first practice with several miles already under their belts.

“To be a good cross country runner, you can’t just show up on the first day of practice and get ready. It’s already over,” he said. “You have to have run a ton of miles over the summer. We set a goal for those high school boys to run 150. We’ve got probably four or five that will get there.”

But the smoke that has blanketed the Flathead Valley for days on end may compound that difficulty. Last Thursday, Nollan advised his athletes not to run outside due to poor air quality.

“If it doesn’t blow out of here, we have to start getting creative,” he said. Possible alternatives to outdoor practices include training on treadmills at the Montana Athletic Club or cobbling together a course inside the school buildings.

“To get a mile or two is painful in here,” he acknowledged.

Looking ahead to clearer days, Nollan is excited to add a healthy dose of adventure to the team. For example, when they travel to Libby on Aug. 27 for the first meet of the season, he’s contemplating camping for an evening, or at the very least, stopping to fish along the way.

“I want the team to feel like we’re going on an adventure every time, just enjoying that wild part of life,” Nollan said.

This goal speaks to Nollan’s holistic approach to coaching — focusing on creating strong young men and women, both on and off the course.

“It’s not just about competition — let’s make running adventurous and fun,” Nollan said. “I want running to be a lifestyle for them as they get older.” 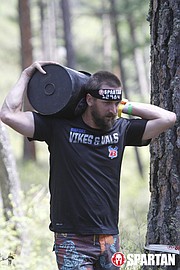 Ryan Nollan competes in a Spartan Race. The new head cross country coach has been participating in Spartan Races for the past seven years. Courtesy photo

Ryan Nollan climbs over a wall obstacle during a Spartan Race. Courtesy photo

Cross country is among a handful of unfunded sports at Bigfork High School. Each season, the team must raise $9,000 to cover transportation, fuel, entry fees and coaching stipends. Support the team with a monthly contribution ranging from $1-100 at www.patreon.com/runfunded. Follow the Bigfork cross country team on Facebook and Instagram @Runfunded.