Electric Avenue will once again become a wave of red, white and blue as the annual Bigfork Fourth of July Parade returns to the downtown corridor at noon on Sunday, July 4. The Bigfork Area Chamber of Commerce-sanctioned parade was put on hold last year due to the coronavirus pandemic, but local residents held an alternate parade that was well-attended along Montana 209 in Ferndale. Chamber executive director Rebekah King said the town has already hosted several successful events this spring, most recently, the Montana Spartan Race followed by the Bigfork Whitewater Festival, and found “reason not to do it,” she said.

Much of life in the Flathead Valley has returned to pre-pandemic ways, although the vaccination rate in Flathead County is 36% as of Tuesday which is still behind the national average of 42.6%. Cases of COVID-19 have been following a significant downward trend since the start of the year with 104 active cases in the county according to the Montana Department of Health and Human Services. People who are fully vaccinated can resume normal activities without wearing a mask, the Centers for Disease Control and Prevention advised, while those who are not should continue precautions including wearing a mask and staying six feet apart.

The Bigfork Fourth of July Parade typically draws between 3,000-5,000 attendees each year, and if the other recent events are anything to go by, turnout could be on the high side.

“If people want to see the parade, they need to get here early. Our shuttles will start running at 8 a.m.,” King said. Some viewers set up camp as early as 7 a.m. and many choose to hang out in town for the morning, have breakfast and mill about the shops before the event kicks off. Parking will be available in the large grass lot at the intersection of Montana 35 and 82 with free shuttles transporting guests back and forth from 8 a.m. to 5 p.m. Handicapped parking will be available at First Interstate Bank at 800 Grand Ave. Absolutely no traffic will be allowed downtown the day of the parade, King noted.

The theme of this year’s parade is “Essential Workers – the Heart of Bigfork.” To recognize local essential workers from grocery store clerks to nurses, the chamber is soliciting nominations for this year’s grand marshals until June 20.

“We just wanted to put it out there as an opportunity for employers and the public to nominate the employees who made that last 15 months better for them,” King said.

To date, she’s received 50 nominations, but hopes to receive more.

Parade-goers are encouraged to don their favorite red, white and blue attire but are asked to leave political signs and apparel at home. At past events, the chamber, which is a non-political entity, has permitted candidates for public office to participate in the parade. However, King said that this year there seems to be “a lot of heightened emotion on both sides.” In the interest of keeping the focus on the non-partisan holiday, the chamber opted to limit political displays.

“It is about the community. It is about celebrating the 4th of July and the birth of America,” King said. “It’s not about your political party.” Any person or float that is deemed offensive or political by parade organizers will be removed from the event.

King noted that attendees should be prepared for crowds and longer than usual wait times at restaurants, especially given that many businesses are dealing with staffing issues. 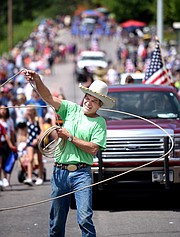 Those who are interested in having a float in the parade are required to pre-register, which can be done online at the chamber’s website, www.bigfork.org. Fees are $25 for chamber members and $50 for non-members, which along with sponsorships, help cover the cost of putting on the event. Between porta-potties, security and the shuttle service, it costs the chamber roughly $5,000 to hold the parade.

In addition to financial support, the parade depends on between 50-60 volunteers who help out with traffic safety, parade lineup and crowd control. To volunteer, contact the chamber at 837-5888.