Walker Fisher is sandwiched between a pair of Troy defenders in the third quarter Thursday. JEremy Weber

Heading into the locker room after an 81-75 loss to Thompson Falls January 12, the Vikings basketball team knew there was work to be done. The team that had come into the 2021 season with high expectations was 2-2 and struggling on the defensive side of the court.

To make matters worse, the team soon learned that it would be facing an extended hiatus due to COVID-19, but the break may have been just what the Vikings needed.

It was a refocused Vikings team that took the court against Mission January 26, a team with a new level of defensive intensity and unselfishness on offense. More than a month and 10 games later, the Vikings have not lost again.

“We gave up 81 points against Thompson Falls and we knew that we wouldn’t be winning many games if we continued to allow that kind of scoring. It’s pretty sad when you score 75 points and lose a game,” head coach John Hollow said. “We looked in the mirror and found some things we needed to fix and we got to work.” 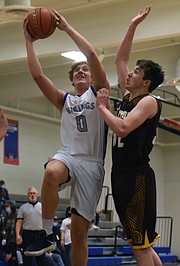 According to senior forward Cormac Benn, the Thompson Falls loss was the turning point of the Vikings’ season.

“After that loss, we bought into playing together as a team and playing great defense,” Benn said. “Coming out of quarantine after losing to Thompson Falls, I think we realized how fast our season could be taken away and that we couldn’t take any game lightly.” 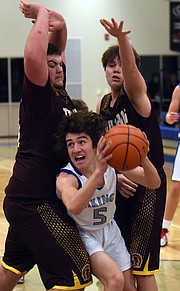 Walker Fisher is sandwiched between a pair of Troy defenders in the third quarter Thursday. JEremy Weber

Now sitting at 12-2, the Vikings enter this week’s Western B Divisional Tournament in Eureka as the top seed with their sights set on a trip to the State Tournament in Billings.

“We knew that we needed to get back to playing solid defense and I really think our kids have bought into that. Right now, things are really clicking for us,” Hollow said. “I’m not going to beat around the bush. I think we are the team to beat in Eureka. We are playing really good basketball and we have kids that believe in themselves and each other. We are going to have to play good basketball to win, but I am excited. We are a team that is built to play well in tournaments. We have good defense and we can get scoring from several players.”

With five players averaging better than seven points-per-game, the Vikings have bought into an unselfish offensive style that prevents opponents from keying in on one player and keeps defenses scrambling to keep up.

“This team is very unselfish and loves sharing the ball,” Benn said. “We all could score fifteen to twenty points in a game, but we don’t care who scores just as long as we win.”

Bryce Gilliard and Walker Fisher lead the team in scoring at just over 11 points-per-game, but Benn, Isak Epperly, Levi Taylor and Colin Wade all score better than five points-per-contest for a Vikings team that has averaged 62 points over it’s last 10 games.

“This is as selfless a team as I have ever been around. They care about each other and they share the ball really well. I think we have had seven or eight different leading scorers throughout the season,” Hollow said. “Everyone is buying into their roles and doing what they need to do for us to be successful.”

Defensively, the Vikings have mostly turned away from the full-court press that Hollow was implementing early in the season in favor of a stifling half-court pressure that has held opponents to just 46 points per game over the past 10 contests.

“Yes, I had planned for us to be a pressing team, but when we got into game action I learned that is just not who this team is. I have to adapt to what this team’s strengths are,” Hollow said. “We are a bit more simple with what we do, but we do it well.

According to senior guard Fisher, it is the friendship of the players off the court that has helped the defense come together for the Vikings.

“We know that we can rely on each other on the defensive end,” he said. “We are very close as a team outside of basketball so that translates onto the court.”

“Everyone has bought into our defense and puts in one hundred percent effort on that side of the ball,” Epperly said. “Defense has been our main priority all year and has been the key to our success.”

According to Hollow and his players, the team’s confidence level is high heading into the divisional tournament, but they know winning the title will not be easy.

The Vikings will put their winning streak on the line Thursday as they open play at the Western B Divisional Tournament in Eureka as they face Anaconda at 3 p.m.