Bigfork's Arianna Saari sends the ball past the Thompson Falls defense at the 7B District Torunament in St. Ignatius Saturday. (Jeremy Weber/Bigfork Eagle)

Football and Volleyball opened up post-season play last week as the Valkyries were in action at the 7B District Volleyball Tournament in St. Ignatius while the Vikings picked up a lopsided win at Glasgow in the opening round of the Class B football playoffs.

The Vikings used a 28-point first quarter to blow past Glasgow in the opening round of the Class B football playoffs Saturday, downing the Scotties 49-0.

George Bucklin had four touchdowns and two interceptions in the opening quarter for the Vikings, who dominated both sides of the ball in the blowout victory. Bigfork piled up 305 yards of total offense while holding the Scotties to just 45.

Bucklin’s scoring runs from four, one and two yards out put the Vikings up 21-0 before he returned his second interception of the quarter for another touchdown to put Bigfork up 28-0 after 12 minutes of play.

Levi Taylor broke free for a 47-yard scoring run in the opening moments of the second quarter and quarterback Patrick Wallen hooked up with Wyatt Johnson from 26 yards out just before the half to give the Vikings a 42-0 advantage at the break.

Joseph Farrier put the icing on the cake with a 34-yard scoring run in the third quarter for the final touchdown of the game.

With the victory, the Vikings advance to play at Broadwater (Townsend) in the state quarter-finals Saturday at 1 p.m. A team that likes to run the spread offense, the Bulldogs advanced to the state quarterfinals last season, where they lost to Florence-Carlton, 28-7.

The Bulldogs come into Saturday’s game with the Vikings 8-1 this season, their lone loss coming 20-14 at the hands of Florence-Carlton in week three.

Taylor led the Bigfork ground attack in the win over the Scotties Saturday, finishing with 136 yards on 11 carries while Bucklin had 90 yards and Farrier added 62.

Wallen two-for-two passing for 34 yards while Johnson led the defense with 5.5 tackles, including one sack and three tackles for a loss. Jeremiah Venegas added five tackles and Andrew Olson had an interception.

The Valkyries volleyball team will enter the Western B Divisional Tournament as a No. 3 seed after going 1-2 at the 7B District Tournament in St. Ignatius over the weekend.

Bigfork took the first set from Eureka 25-23 in a rematch in the next round, but dropped the next two sets to fall behind 2-1. The Valkyries rallied to win the fourth set 25-21, but fell in the final set 15-10.

Alexis Saari led the Bigfork attack with 30 kills during the tournament while Zoey Albert added 27 and Ellie Jordt recorded 20. Arianna Saari added 17 kills in the three matches while Inga Turner had 16 and Isabella Ellison had 15.

Jessa Newton made good on 93 percent of her serves, recording 10 aces during the tournament and added 63 assists to lead the Valkyries.

Defensively, Callie Martinz led the Valkyries with 45 digs while Newton and Albert each had 30. Arianna Saari recorded eight blocks in the three matches while Alexis Saari had seven and Turned added six.

The Valkyries will open the Divisional Tournament in Thompson Falls at 11:45 Thursday morning as they take on second-seed Anaconda.

The Valkyries soccer squad had five players named to the All-Conference Team coming off their best season in program history, a campaign that saw Bigfork finish 7-6-1 and advanced to the state semifinals before losing to eventual state champion Laurel.

For their efforts this season, seniors Brette Guenzler and Scout Nadeau were named to the All-Conference second team along with sophomore Danika Bucklin.

Two players from this season’s squad have already signed on to play at the collegiate level as Guenzler will join Western Colorado in the fall while Tanko will be playing at the University of Texas at Dallas.

“This season may not have ended the way we wanted, but it was successful,” head coach Tim Guenzler said. “Our younger players picked up some valuable experience in the playoffs and our future looks bright. It’s just great to be a part of this.” 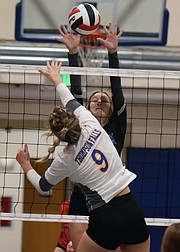 Bigfork's Arianna Saari sends the ball past the Thompson Falls defense at the 7B District Torunament in St. Ignatius Saturday. (Jeremy Weber/Bigfork Eagle)