Bigfork running back Levi Taylor hands off to fellow running back George Bucklin in the first quarter against Whitehall Friday. (Jeremy Weber/Bigfork Eagle)

Bigfork's Ellie Jordt (5) looks on as Tessa Troyer steps in front of Zoey Albert (8) to make a play on the ball against Plains Monday. (Jeremy Weber/Bigfork Eagle)

Another exciting week of Bigfork High School sports saw the Valkyries Volleyball team pick up three wins to stay on top of the district standings while the Vikings football team earned a blowout win over Whitehall to stay undefeated. The Vikes and Vals soccer teams split games against Whitefish and Libby while the cross country took second place in Thompson Falls.

The Valkyries made short work of Plains and Troy last week and survived a nailbiter at Eureka to move to 4-0 in district play and 5-3 overall this season.

Zoey Albert and Isabella Ellison each had three kills in the win over Troy while Albert also added five aces. Callie Martinz led the Valkyries with six aces and 10 digs while Mackenzie Holton led the squad in assists with seven.

Albert had seven kills and Inga Turner, Alexis Saari and Ellie Jordt added four each in the Valkyries win over Plains Monday. Jessa Newton and Martinz dominated from the service line as Martinz recorded 15 aces and Newton had 11. Newton also led the Valkyries with nine assists in the victory.

Holton and Newton combined for 27 of the team’s 36 assists in the win as Holton led the way with 15 while Newton added 12. The duo also accounted for 11 aces in the contest with Holton serving six and Newton added five.

Albert had 12 digs to lead the Valkyries defense and Martinz added 11 while Turner recorded four blocks.

The Valkyries will look to continue their four-game winning streak at home against Thompson Falls Saturday.

The Vikings used a 27-point second quarter to put away visiting Whitehall early Friday as Bigfork amassed 434 yards of total offense en route to a 54-6 victory over the Trojans.

Wallen was 10-12 passing for 136 yards and a touchdown in the win, hooking up with Isak Epperly from four yards out for a touchdown late in the first half.

Dane Hansen led Bigfork’s receiving corps with three catches for 70 yards and returned one interception for a touchdown on defense.

The Vikings defense held Whitehall in check throughout the contest, recording four interceptions and holding the Trojans to just 114 yards of total offense.

Epperly had two picks to lead the passing defense for the Vikings while Hansen and Thomas Eberly also had interceptions.

With the win, the Vikings improve to 4-0 this season. Bigfork will look to remain undefeated Friday as they travel to Missoula to face Loyola-Sacred Heart.

The Vikings and Valkyries soccer squads took on the top and the bottom of the district last week as both teams picked up wins over winless Libby, but fell to undefeated Whitefish teams.

Tanko got the Valkyries on the scoreboard with a goal in the 10th minute before Guenzler gave Bigfork a 2-0 lead on a penalty kick in the 24th minute.

Tanko assisted on another Guenzler goal before the half as Bigfork held a 3-0 advantage at the half.

Nadeau scored goals on assists from Zoey Guffin and Braeden Gunlock in the second half and Tanko added her second goal in the 65th minute.

The Valkyries defense held the Lady Loggers to a single shot in the win.

Asa Barrett scored the Vikings only goal on an assist from Traic Fainter Thursday as the Bigfork boys downed Libby 1-0.

Both Bigfork squads were held scoreless by Whitefish September 21 as the Vikings fell 0-7 while the Valkyries were defeated 0-2.

The Vikes and Vals both sit in third with 2-2 conference records, behind Columbia Falls (3-1) and Whitefish (4-0).

Both teams were in action against Columbia Falls after press time Tuesday and will travel to face Polson Thursday. The Vikes and Vals will celebrate Senior Night against Libby on Tuesday, October 5.

The Vikings had three runners in the top 15 Saturday as they earned second at the Thompson Falls Invitational.

The Vikings finished behind only defending Class A state champion Hamilton and ahead of other Class A competition Columbia Falls and Whitefish.

The Valkyries had just three runners, but Mahali Kuzyk finished 10th with a time of 22:26.45 while Erika Dowling was 25th and Tabitha Raymond was 26th.

Bigfork’s cross country runners will be in action at the Mission Shadow Duels in Polson Saturday. 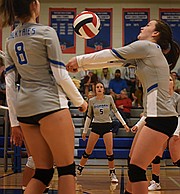 Bigfork's Ellie Jordt (5) looks on as Tessa Troyer steps in front of Zoey Albert (8) to make a play on the ball against Plains Monday. (Jeremy Weber/Bigfork Eagle) 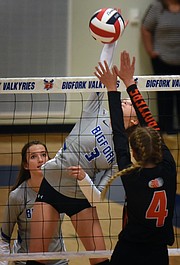 Bigfork running back Levi Taylor hands off to fellow running back George Bucklin in the first quarter against Whitehall Friday. (Jeremy Weber/Bigfork Eagle)