If Only the Scenery Was for Sale – The Kootenai Lodge

A picture of the patio at one of the cabins with flowers on the Kelley-Evans estate. Credit – Bigfork Eagle.

A picture of the interior of the main lodge at Kelley-Evans estate from an earlier newspaper story. Credit – Bigfork Eagle.

A picture of the builders of the main lodge on the Kelley-Evans estate at some time during its construction. Credit – Bigfork Eagle.

A picture of the main lodge on the Kelley-Evans estate at some time during its construction around 1917. Credit – Denny Kellog Collection.

While Bigfork, and many parts of western Montana for that matter, are experiencing a meteoric rise in popularity from visitors, one might think that this is a new trend. But, in reality Bigfork has always been a popular place for people to relax and get away from the big city or to experience the outdoors in a more rustic setting. Horseback trail rides, trout fishing, and skiing are just a few of the outdoor pursuits that have long drawn people to the area, not to mention the Salish people and other tribes that enjoyed camping and building sweat lodges around what we now call Bigfork as they transited to other parts of their lands. Then one shouldn’t be surprised when, in a seemingly remote location, in the early 1900s, two of the most influential and powerful men in Montana and in the U.S., decided to build a rustic lodge for their family’s enjoyment on the shores of Swan Lake.

Orvis Evans worked for the Anaconda Copper Mining Company as an attorney and originally came to Swan Lake on a fishing trip. He later convinced Cornelius “Con” Kelley, another company attorney, and eventually its president in 1918, to join him as well and in 1908 they purchased 127 acres from Butte attorney A.J. Campbell. What is even more impressive is that in those early days, the estate, being located approximately 225 miles from Butte, required three days of travel by train, steamboat, and coach just to get there. But the two men enjoyed their time and continued to purchase additional parcels and eventually owned nearly 3,000 acres. While there were several smaller structures on the property, by approximately 1911 or 1912 it was decided to build a main lodge. Evans and Kelley hired architect Kirtland Cutter of Spokane to design the 14,000-square-foot lodge in the Adirondacks style. While perhaps not known widely today, at the time Evans hired him, Cutter had just finished designing the new Lake McDonald Lodge in Glacier National Park. Given the intricate nature of the log and stonework, the main lodge took a dozen years to build and wasn’t completed until 1921. Many local Bigfork residents including Ward Whitney and Fred Kitzmiller solely worked on the estate for a decade. The main lodge used unpeeled larch logs for walls and western red cedar for trim and the ceilings in the main entertainment area soar to 30 feet. While mainly used to host large parties, there are two wings along the building’s eastern side containing six bedrooms, each with individual fireplaces and while the Kootenai Lodge, or Kelley-Evans Estate as it was called, may have looked laid back and relaxed, the lifestyle and parties were not.

By 1921 when the main lodge was completed, Kelley was the company president and Evans Chief Counsel. As such, the lodge and its encompassing estate grounds became a summer playground for some of the richest people in America. Seventy people worked on the estate using five power mowers to groom 32 acres of lawn. There were greenhouses where gardeners grew over 900 geraniums to decorate the rock patios each summer, while others cared for Mary Kelley’s showplace rose garden. And given the east coast clientele, there were polo grounds and three men worked full time in the 31-stall horse barn. Ten men also worked throughout each winter to cut and store up to 60 tons of ice which was kept in sawdust to provide ice for summer-evening cocktails and sixty cords of wood fueled the hot-water plant. Dinners were formal affairs with silver, Wedgwood china and fine wines served in crystal and with Prohibition looming, it is reported that Kelley and Evans stockpiled a large supply of liquor. And given that celebrities such as Charles Lindbergh, Will Rogers, John D. Rockefeller Jr., Charlie Russell, and Queen Wilhelmina of the Netherlands. And while there were many glamorous guests another benefit of the lodge was that many local residents were employed at the lodge and as noted, local builders left and indelible mark on the exquisite structure with their amazing craftmanship.

A picture of the main lodge on the Kelley-Evans estate at some time during its construction around 1917. Credit – Denny Kellog Collection.

A picture of the builders of the main lodge on the Kelley-Evans estate at some time during its construction. Credit – Bigfork Eagle. 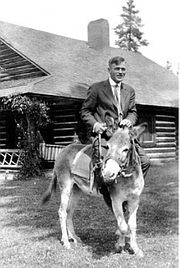 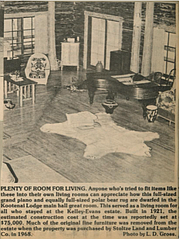 A picture of the interior of the main lodge at Kelley-Evans estate from an earlier newspaper story. Credit – Bigfork Eagle.