The Shipwrecks and Underwater Treasures Around Bigfork

The Kee-O-Mee in Flathead Lake in the late 1920s or early 1930s. (Photo courtesy of The Northwest Montana History Museum)

A video still showing the propeller of the Kee-O-Mee at its final resting place in Somers Bay. (credit Ky Zimmerman)

An excerpt from a March 1960 Missoulian article speaking to crash of the Marine Corps jet. (credit Missoulian)

An excerpt from a Missoulian article showing the train car pieces in Swan Lake. (credit Missoulian)

When you think of “shipwrecks” it’s possible your mind wanders toward vast oceans and the days of pirates, Spanish galleons, and lost treasures. While the excitement of discovering a sunken ship laden with gold might be hard to beat, it’s important to remember that marine history also lies within the worlds many lakes and rivers many of which are right here in our own backyard around Bigfork.

One great example of underwater treasures are the large sunken logs that came from the 1914 Swan Lake timber sale. It’s estimated that 20 to 25% of the harvested logs sank in the Swan River and Flathead Lake before reaching the mill in Somers. The Swan River has holes that are nearly 60 feet deep, and logs are stacked ten to fifteen-feet thick in some of those holes incredibly well preserved due to the low oxygen level. During the development of the Bigfork documentary, Jody Baker of Northwest Dive and Recovery and Kyren Zimmerman, underwater videographer, let our historians tag along and document the process of salvaging some of those logs.

Fast forward to today and Ky, who is currently developing a Remote Operated Vehicle (ROV) program in the Flathead, is teaming up with the Bigfork Art & Cultural Center to complete an introductory archeological study of Flathead Lake. The goal is for Kyren and a specialized group of local historians to survey submerged indigenous historic sites around the lake. But this isn’t the first time Kyren has been part of an underwater archeology project in Flathead Lake.

After returning to the U.S. from New Zealand, where he was working on documenting agricultural impacts to trout fisheries, Kyren was able to use his marine photography skills as the lead photographer for an archaeological survey expedition aiming to relocate and recover the Kee-O-mee, a 54ft leisure boat that went down in 1937. After interviewing Dorothy Sherman, whose father owned the boat, the team had a solid idea of where the boat went down. The next step was to conduct side-scan sonar search grids to locate the wreck and then dive on the site to confirm the sonar output was in fact the Kee-O-Mee. The team salvaged silverware, plates, and ice block tongs, which Dorothy was able to identify as belonging to the Kee-o-mee. Several of those artifacts are now housed at the Northwest Montana History Museum in Kalispell. But before we leave the Somers area, we’d be remiss not to mention the Willis, another small vessel that sank near the town back in 1941 which the team has been documenting this summer.

Back in June, our article briefly touched on the rich steamboat history of Flathead Lake. One thing that was discussed, was the ingenuity of the inland mariners to recycle and salvage many of the steamships when they burned or sank. The Pocahontas for example was a passenger steamboat that sank near Melita Island in 1888 but it was eventually raised and refitted. That said, records indicate that there are at least six steamboats from that era hidden in the depths of the massive lake not to mention some downed airplanes including a Marine Corps Grumman F9F Cougar fighter jet that crashed near Wild Horse in March 1960.

And lest we think it’s only boats that have sunk in our lakes, in a quirky connection back to the Swan Lake timber sale in 1914, many of the logs were initially pulled out of the woods and shuttled down to the lake by small trains. At the south end of Swan Lake, near the west shore, there are reportedly a handful of train cars that ended their careers by going to the bottom of the lake. It’s unclear if they were placed there on purpose or if an accident took place but we’ll soon know hopefully as the survey team has been looking for them.

And while the wrecks and treasures mentioned above are some of the ones we do know about, there are likely many other historical treasures lying in wait in the waters around Bigfork. We’ll just have to follow up with Ky and the team after they complete the study to see what else they have found. 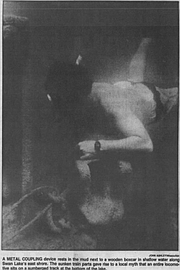 An excerpt from a Missoulian article showing the train car pieces in Swan Lake. (credit Missoulian) 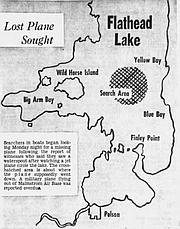 An excerpt from a March 1960 Missoulian article speaking to crash of the Marine Corps jet. (credit Missoulian)

A video still showing the propeller of the Kee-O-Mee at its final resting place in Somers Bay. (credit Ky Zimmerman)

The Kee-O-Mee in Flathead Lake in the late 1920s or early 1930s. (Photo courtesy of The Northwest Montana History Museum)