$ID/NormalParagraphStyle:Parade participants handed out roses to Harriet Dent — there were, of course, 100 in total.

$ID/NormalParagraphStyle:Harriet Dent said she loved seeing the dogs dressed up for her birthday most of all.

$ID/NormalParagraphStyle:Drivers and passengers wave and wish Harriet Dent a happy birthday as they drive by.

$ID/NormalParagraphStyle:Many of the cars were decorated with balloons in honor of Harriet Dent.

Harriet Dent turned 100 years old last Tuesday. It’s a milestone that is often met with great fanfare — a big party, lots of cake, perhaps a firework or 10. But being that her special day fell in the midst of a global pandemic, she wasn’t prepared for anything too extravagant. Her family — and the community at large — had other plans.

When Dent walked outside of Rising Mountains Assisted Living, she saw her fellow residents spread out in chairs along the front sidewalk with balloons, signs and of course, face masks. It was a rare treat for them to assemble en masse, enjoying the sunshine together, yet separated for safety. They sang a rousing rendition of “Happy Birthday” and then the real festivities began. A parade of two dozen vehicles proceeded past the assisted living facility, many of their occupants decked out in red — Dent’s favorite color. Some of the vehicles were decorated with balloons, streamers and signs in her honor and they all stopped to wish her a happy birthday and deliver roses, cards and big hearty smiles.

Behind Dent’s mask, she was smiling, too.

A pair of dogs arrived in costume — one wore a flower crown while the other was dressed in a unicorn outfit — and the local Scouts BSA troop arrived by boat — well, one pulled by a trailer that is. Some of Dent’s visitors looped around the lot twice, others laughed with her and still, others cried. They were her family members, friends, facility workers and total strangers united by a desire to do a little good in these hard, uncertain times.

Beverly Grout, Dent’s youngest daughter, said her family had originally planned a special celebration for Harriet, with many guests flying in from Dent’s home state of Minnesota. But with the hastening spread of the coronavirus, first overseas and then throughout the U.S., they were forced to cancel.

As an alternative, Rising Mountains Executive Director Suzette Herreid and Grout suggested a drive-by birthday party and the idea blossomed from there. Dent’s family spread the word within the local community and shared their party plans on social media. More than 20 people participated in the parade and another 200 sent in birthday cards.

The toughest part was keeping the whole ordeal a secret.

Dent knew her family members who lived locally were going to join her for a birthday dinner, but that was it. The colorful procession was a complete surprise.

“The people were having a lot of fun and that’s what we aim for,” Dent said, noting that she enjoyed the costumed pups best of all.

Herreid said Tuesday’s celebration was beneficial for all of the residents, including Dent, who had been quarantined for four months due to the coronavirus. The elderly, and especially those who reside in nursing homes, are most at-risk for developing serious complications from the virus, according to the Centers for Disease Control and Prevention.

But for one afternoon, the virus wasn’t the focus.

“It was something that we wanted to do for her to make it special,” Herreid said. “One hundred — not a lot of people hit that, and I think with what’s going on right now, it was important to us to make sure she had her day.” ■

$ID/NormalParagraphStyle:Parade participants handed out roses to Harriet Dent — there were, of course, 100 in total. 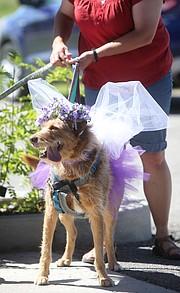 $ID/NormalParagraphStyle:Harriet Dent said she loved seeing the dogs dressed up for her birthday most of all.

$ID/NormalParagraphStyle:Drivers and passengers wave and wish Harriet Dent a happy birthday as they drive by. 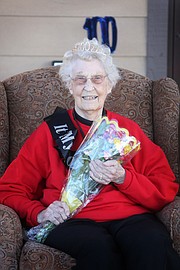 $ID/NormalParagraphStyle:Many of the cars were decorated with balloons in honor of Harriet Dent.