Bigfork native behind the lens of popular TV shows

Mason Gertz has enjoyed travel and adventure through his job as a camera operator for popular shows such as “Deadliest Catch,” “Wicked Tuna” and “Mountain Men."

When Mason Gertz graduated from Stillwater Christian School in 2006, he had no idea where the future would take him.

An outdoor enthusiast, Gertz grew up in Bigfork and attended school there through the 10th grade, but never dreamed his career as a cameraman and field producer would take him around the world — including spending nine years in the Alaskan wilderness.

Working for popular television shows such as “Deadliest Catch,” “Wicked Tuna” and “Mountain Men,” Gertz has literally traveled the globe, capturing one amazing scene after another through the lens of his cameras.

“It definitely involves a lot of adventure and I get to meet some of the most amazing people, many of which have become lifelong friends after I am done working with them,” Gertz said. “There are some amazing perks to what I do.”

Gertz had plans to join the military after high school, but when his uncle offered him a job as a cameraman, Gertz couldn’t say no. With a talented artist’s eye and a thirst for knowledge, Gertz went to work with a singular goal — to learn as much as possible from every person he worked with on every project with which he was involved.

His strategy worked well and within five years, Gertz was working as a camera operator for a hunting show on the now defunct Versus Network (later known as SPIKE TV), filming one of his childhood idols, Jeff Foxworthy.

A big fan of Foxthworthy’s Redneck Comedy Tour while growing up in Montana, Gertz was delighted to spend hours just feet from the comedian and outdoor enthusiast, again taking every chance he could to soak up knowledge that would help his career. It was during one of those mornings sitting in a hunting blind that Foxworthy shared a bit of advice that would stick with Gertz throughout his future reality television projects.

“Sometimes the best television you can make is by just being yourself in front of the camera,” Foxworthy told him.

Gertz kept that philosophy in mind as his career continued with a filming company in Colorado. It was during his time there that he worked with Chris Richardson, who would go on to create Warm Springs Productions in Missoula and change Gertz’s life forever.

When Gertz came to Richardson in 2012 looking for a job, Richardson told him about a new project his company was working on chronicling the lives of America’s last frontiersmen on a show they called “Last of the Mountain Men.” The project would require Gertz to spend large amounts of time isolated with his subject in the wilderness of Alaska with no electricity, no running water and many miles from civilization.

Having grown up in Montana, Gertz was excited about getting to visit and work outdoors in Alaska, but said nothing can quite prepare one for the conditions there.

“It was so amazing to get to go out into the wilderness of Alaska, but you quickly learn that you can never let your guard down. You need to always have a plan and I learned so many survival skills while working on that show,” he said. “I learned to never go anywhere without a lighter and a piece of paper because it can literally save your life up there.”

Gertz said he also had to quickly learn how to deal with the pressure of filming reality television, where the demand to constantly produce new content can be grueling.

“We couldn’t just go out there and say we tried really hard but come back with nothing,” Gertz said. “That’s how you get fired.”

Gertz soon found his groove, capturing amazing footage of his subject, Marty Meierotto, as the two spent weeks alone together, forming a friendship that endures to this day. Despite a 27-year age difference between the two men, they soon became best friends and Meierotto would even go on to serve as a groomsman at Gertz’s wedding and guide the Alaskan hunting trip the couple took as their honeymoon.

Gertz has now been working with Meierotto and the “Mountain Men” show for nine years, but has also spent time working on other shows for the History Channel, Discovery, National Geographic and more.

He has enjoyed them all, but there have been some harrowing moments along the way. He became very sick while at sea filming for “Deadliest Catch” and had to be airlifted to the mainland from 200 miles offshore, was held at gunpoint while filming in Western Africa and has been mere feet from great white sharks, but Gertz said one of his closest calls came while working with Meierotto in Alaska.

It was 35 below zero the day Gertz fell through the ice and into a stream nearly a mile away from camp. He was fully submerged in the freezing water before his camera jib caught in a rock and pushed him back above the surface. Though he was able to grab the ice and pull himself from the water with the help of Meierotto, Gertz still had to face the mile walk back to camp as his wet clothes and equipment quickly froze.

“I basically just became one giant block of ice walking back to the cabin,” Gertz said. “It could have been a lot worse, but it is just one of many close calls I have had over the years. Doing what I do, you experience so many things that it all becomes a big blur after a while.”

Gertz continues to work a busy schedule, spending as much as 10 months a year away from home, but says the sacrifice is worth it to be able to allow his wife to stay home with their two kids. The couple is expecting their third child in May.

“I’ve been in some amazing places and seen some crazy things, but it has all been worth it,” he said. “I couldn’t imagine doing anything else.”

Reporter Jeremy Weber may be reached at 758-4446 or jweber@dailyinterlake.com. 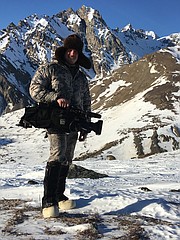 Mason Gertz has traveled the world working as a cameraman and field producer, including spending time in the Alaskan wilderness filming "Mountain Men."

Mason Gertz takes time away from filming for History's "Mountain Men" for a quick photo with his friend and subject Marty Meierotto. 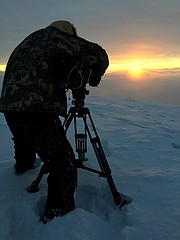