The Jones family, Zac, Mitch, Anne and Maddy, are helping provide local brewers with fresh, locally grown hops from their farm in Bigfork.

Local brewers have a new option in their search for a better beer with the recent expansion of the Big Sky Hops Farm in Bigfork.

Owned and operated by the Jones family, the hop yard on Ramsfield Road has been supplying brewers with six varieties of hops oil since 2017, but only recently received a grant to get the equipment needed to produce hop pellets preferred by most brewers.

“We pride ourselves on being able to harvest the hops one day and have them pelletized and packaged the next,” co-owner Maddy Jones said. “A lot of larger farms are unable to do that and the process allows us to provide a lot more freshness to our local brewers. Our hops pellets are delivered with all of the acid and aroma they have the day they are harvested.”

Along with her brother Zac and parents Mitch and Anne, Maddy and the family have been growing cherries in the Flathead Lake area since 2004, but made the decision to expand into hops production in 2015.

As fourth generation small business owners, Maddy and Zac take pride in being able to maintain their operation while helping out the breweries around the Flathead Valley and beyond by supplying a locally grown product.

“Using our product gives local brewers the chance to tell their customers that their beers were made with hops that came from just down the road, which is quite unique,” Maddy said. “In these times, we all really need to look out for our neighbors and working with local brewers helps us do that, and vise versa. We are trying to get into as many local breweries as possible and we have been very fortunate they have shown us such overwhelming support. Several area brewers have been willing to test our product and give it a shot.”

The foray into the world of hops farming began for the Joneses in 2016 when Maddy and Zac decided to start looking to a second crop to go along with their cherries and soon found that hops farming used much of the same equipment. The family purchased 80 acres just north of Bigfork and set to work on 18-foot high trellises that comprise the 10 acres of their main hop field later that fall and winter. The first hop crop of 10,000 plants was grown in the spring of 2017.

Zac put his horticulture degree from Montana State University to work to keep the plants healthy while Maddy put her business degree from MSU to work in marketing and sales.

Knowing that hops plants take several years to reach maturity, the Joneses marked their hops to Glacier Hops Ranch in Whitefish, where it is processed into “Hopzoil” and sold to brewers around the world.

With their plants set to reach maturity in the 2020 growing season, the family applied for and received a $40,000 Montana Growth Through Agriculture grant, which allowed them to purchase the processing equipment needed to produce dried hops pellets, which brewers prefer to oil for its acidic and bitter flavor.

Today, the hop yard has six varieties: Ahhhroma, Michigan Copper, Mackinac, Triumph, Saaz and Cashmere. Each variety has its own unique acid level used to create different flavors, which is important in helping brewers create a variety of beers.

Hops from the Ramsfield Hop Yard are already being used by several brewers around the area, including Kalispell Brewing Company, Sunrift Beer Company and the FVCC’s Brewing Academy of Montana in Kalispell, the Backslope Brewery in Columbia Falls, Glacier Brewing in Polson and the Flathead Lake Brewing Company in Bigfork. Outside of the valley, their hops are being utilized by Conflux Brewing and Guild Brewing in Missoula as well as by Gold Triangle Brewing in Fort Benton. Western Cider in Missoula and Lewis and Clark Brewing Company in Helena have used their hop oil.

“Last Saturday, I got to go to Flathead Brewing with my family and have a beer that was made with our hops. That was something that we have been waiting to do for a long time and it was amazing,” Maddy said. "I hope we have a great relationship with them and everyone in the Flathead Valley for a long time to come.” 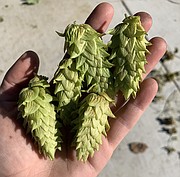 The cone-shaped flower of the hops plant is what is used to flavor beer. 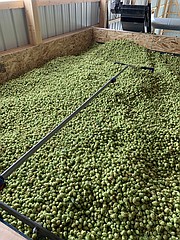 After being separated from the rest of the plant, the hops flowers are dried before being processed into pellets. 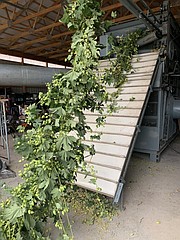 The 18-foot long hops plants are fed through the processor to separate the flowers from the rest of the plant.