Back in July, ACES After School site manager Cathy Hay, wasn’t sure there was a future for her child care program. The owners of their building were looking to sell and ACES had to be out by early September. But finding a building within walking distance of the school, and during a pandemic to boot, was challenging to say the least. But come September things changed for the better.

In addition to landing a new and larger home just steps from the elementary school, ACES received $211,000 in funding from the State of Montana through the Child Care Provisions of the CARES Act.

Gov. Steve Bullock allocated $50 million of the state’s $1.25 billion in federal COVID-19 relief dollars to keep the doors to Montana day care centers open. Thirty million will be paid to providers of care for school-aged children, like ACES, while the remainder will be split between families needing in-home care and helping facilities grow capacity and increase sanitation practices.

“It’s a huge boost for us,” Hay said. “The people who are attending ACES now don’t have to pay.”

Hay said the funds will cover tuition costs through the end of January. A majority of ACES attendees -- some 60 and 70 percent -- qualify for the school’s free and reduced lunch program which also means they attend ACES at a discount. Now those families, along with those who pay the full tuition amount, won’t have to spend a dime on after school childcare.

“It’s also going to help the people who don’t qualify because times are tough for everyone,” Hay explained. “Kids have a safe place to go -- there’s not a financial burden. That’s one thing I do want the community to know is that we’re good -- we’re good right now.”

A portion of the funds will also be used to hire two additional staff members, provide raises for current team members and cover the costs of some improvements to the facility.

“I hired two more staff because with the extra cleaning … all of the extra stuff that we have to do, it’s been a real burden on my staff,” Hay noted. “We’re working hard. To all of a sudden be able to hire a couple more people so we’re not so over tasked has been huge.”

The funds allowed ACES to purchase hand sanitizing stations outside every door, three air purifiers, new flooring, laundry equipment and to buy a commercial dishwasher, replacing one that Hay said was “on the brink” and constantly in need of repair.

“We’re really excited about taking our building to the next level,” Hay said.

She hopes that in the future, ACES will be able to increase their capacity -- right now they are limited to 50 kids, and 27 are currently on the wait-list. But for now, things are looking up for the program as they settle into their new home and look after Bigfork’s youth. 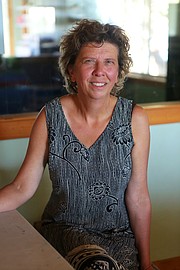 Site manager Cathy Hay is pictured at the new home of the ACES After School program in Bigfork on Sept. 9. (Mackenzie Reiss/Bigfork Eagle)