Bigfork track off to a running start

Cormac Benn was second in the high jump as he cleared a height of 6 feet, a personal best. Jeremy Weber/Bigfork Eagle

Bigfork’s track teams opened the season with a strong showing at home Saturday as the Vikings took first at the Bigfork Invitational while the Valkyries earned second.

Vikings senior Cormac Benn set a new personal best of 20 feet, 4.5 inches as he won the long jump competition and was also second in both the 300 hurdles and high jump as Bigfork compiled 124.5 team points to finish far ahead of second place Ronan’s 80.

Noah Kinslow set a new personal best of 11.27 seconds to take second in the 100 meter dash while Joseph Farrier was fourth. 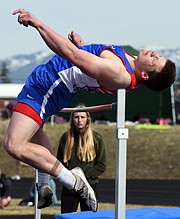 Jack Jensen earned third in the 800 and fifth in the 1,600 while Elliot Sanford, Ryder Nollan and Bo Modderman dominated the 3,200, taking second, third and fourth, respectively. Jordan Betts was third in 110 hurdles and fourth in the 300 hurdles while Andrew Olson ran his way to a fifth-place finish in the 110 hurdles.

The Vikings relays teams earned top-four finishes in both of their races as the team of Farrier, Levi Peterson, George Bucklin and Kinslow took second in the 4X100 relay with a time of 46.39 seconds while the team of Shelton Woll, Jackson Abney, Jeremiah Venegas and Benn was fourth in the 4X400 meter race.

Seth Osborne was second in the pole vault, clearing a height of 11 feet, 6 inches.

The Valkyries also opened their track and field season with a strong showing, finishing the day with 92 points to finish behind only Whitefish’s 165 points and more than 20 points ahead of third-place Seeley Swan’s 70.

The Valkyries had a pair of top finishers in Addison Reichner and Audrey Buenz and Reicher was first in the pole vault after clearing a height of 7 feet while Buenz won the 200-meter race with a time of 28.10 seconds.

Buenz was also third in the 100 meter dash and was the anchor for the Valkyries 4X100 relay team that took second place, along with Chloe Ratts, Afton Lambrecht and Danika Bucklin.

Cormac Benn was second in the high jump as he cleared a height of 6 feet, a personal best. Jeremy Weber/Bigfork Eagle

In addition to Reichner’s top finish in the pole vault, the Vikings placed in two other field events as Scout Nadeau was second in the shot put with a toss of 29 feet, 7 inches while Madison Chappuis was fourth in the javelin with a throw of 85 feet, 6 inches.

Both teams were back in action at the Flathead Invite after press time Tuesday. 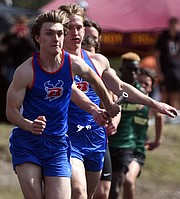