The man who started it all

Doug Smith watches as the dedication sign on the new ambulance at Bigfork Fire Department is revealed. The script on the side of the ambulance reads: "Dedicated to Dr. Doug Smith, the man who started it all." Courtesy Eda Taylor

Doug Smith and Rick Trembath standing next to the new ambulance with the dedication on it. Courtesy Eda Taylor

Dr. Doug Smith is pictured outside of his Bigfork home. Mackenzie Reiss/Bigfork Eagle

In the 1970s, if you had a medical emergency in Bigfork, you were likely in for a long wait while the ambulance crew from Kalispell made its way south. For some residents, waiting wasn’t an option, and without a doctor in town, they’d head to Dr. Doug Smith’s dental practice for help.

A dentist by trade, Smith also had some training in general medicine learned in part through dental school, followed by an internship in the ER at Denver General Hospital. He’d patch them up as best he could, but a series of unfortunate events led Smith to wonder if he could do more.

One such occasion occurred when he got a call from his dental assistant asking for help — her husband was having a heart attack. Smith and his wife raced to the dental assistant’s home in Ferndale and found his employee’s husband lying in bed in full cardiac arrest.

They pulled him onto the floor and began CPR while waiting for emergency responders to arrive from Kalispell. Despite their best efforts, the man didn’t survive.

Dr. Jack Davis, who would later go on to found the ALERT emergency helicopter service, learned of what Smith was doing to help his community. He suggested that Smith consider starting a quick response unit — a team of volunteers trained in emergency medicine.

Smith wasn’t sure how quick they’d be, with a service range that extended down to Swan Lake, but he knew that a locally-based team would certainly be faster than waiting for the ambulance from Kalispell.

The Bigfork QRU was founded in 1975 thanks to Smith and a handful of other local residents, whom he trained in advanced first aid. Fire chief Joe Nelson made room in the firehall to house the used ambulance they purchased and they were off and running. The QRU and fire department were separate entities in those days, but often worked together on incidents like car wrecks.

“It just kept growing gradually, day by day, week by week and I enjoyed it a lot,” Smith said. “Learning medicine is what I wanted to do.”

Smith continued to advance his training, earning an EMT license and undergoing a medical anesthesia residency at Boston Medical Center to further his interest in sedation techniques for special needs patients.

Upon completing his residency in 1983, he purchased a defibrillator -- a machine used to deliver an electric shock in life-threatening cardiac events -- and carried it with him to local sporting events and on calls.

“I think I paid something like eight or nine thousand for it out of my pocket,” Smith said.

This was a revolutionary move because, at the time, most ambulance services weren’t even carrying defibrillators.

But even the best equipment didn’t always guarantee a positive outcome.

There are several calls that stay with him to this day.

Calls that didn’t have a happy ending, no matter how hard he tried.

One, in particular, took place at mile marker 77 on Montana 83.

A couple had driven down to camp for the weekend at Swan Lake and lost track of their child while unloading their belongings. In the meantime, the child had wandered toward the water, fallen off the dock and drowned.

“We got down there and they had taken the child out of the water. We started CPR and I can remember the mother; she kept pounding on my back — ‘my baby, my baby,’” Smith said, tears running down his face. “She saw I was doing everything I could.”

ALERT responded to the scene and took off with the child.

“They said, ‘We got a heartbeat and we got a blood pressure,” Smith recalled. 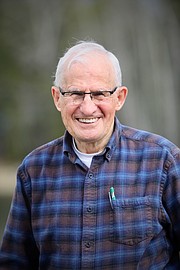 Dr. Doug Smith is pictured outside of his Bigfork home. Mackenzie Reiss/Bigfork Eagle

Doug Smith and Rick Trembath standing next to the new ambulance with the dedication on it. Courtesy Eda Taylor

Doug Smith watches as the dedication sign on the new ambulance at Bigfork Fire Department is revealed. The script on the side of the ambulance reads: "Dedicated to Dr. Doug Smith, the man who started it all." Courtesy Eda Taylor 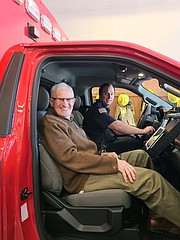 The child survived, but was left with a permanent brain injury.

“I got a letter from the mother about a year later. The baby had died from pulmonary problems and she wrote a letter saying thanks, we had a beautiful year with our child,” Smith said, still misty-eyed. “Mile marker 77 … I can’t go by there without thinking about that.”

But with the losses came wins, too. And Smith also carries those moments with him.

He once responded to a call for a man in his 40s or 50s in the Swan Lake area in cardiac arrest. Smith started an IV, shocked the man’s heart and brought him, miraculously, back to life.

“Lo and behold, two or three years later he was still walking and talking, doing fine,” he said.

And another time, Smith was attending a football game at Bigfork High School when one of the referees collapsed in the end zone. He brought his equipment onto the field, performed CPR and was able to restart the ref’s heart, all while the crowd of sporting fans looked on.

“It’s a great feeling when you finally see it happening,” Smith said of watching patients come back to life.

But Smith will be the first one to note that he didn’t do it alone.

He started a paramedic class at FVCC with help from Eda Taylor. He sought assistance from the Bigfork community when the QRU needed a new ambulance and $75,000 was donated in a matter of weeks. All the while, the ambulance service, along with his passion for delivering the best possible emergency medical care, continued to grow.

Volunteer Rick Trembath said Smith was “one of the best I’ve ever seen” as far as emergency responders go.

“There were several instances where there were critical injuries and he was very methodical and systematic in his treatment,” Trembath said. “He taught others to do the same thing and eventually we had a pretty good reputation for medical treatment out here in rural Montana.”

The all-volunteer QRU grew from about a half-dozen members to as many as 20 or more, he noted.

Dan Elwell, Board Chairman of the Bigfork Fire Department also responded alongside Smith.

“It was unbelievable, that man’s energy — even late in his 70s, he was doing steep bank rescues with us,” Elwell said. “If people had one half the volunteerism that that man had in his life we wouldn’t want for anything.”

In March, the Bigfork Fire Department, which now includes the ambulance service, decided to show their gratitude to Smith for his efforts in bringing quality emergency medicine to the Bigfork community. They contacted his wife, Darlene, to let her in on their plans to dedicate a new ambulance in his honor.

In early March, she told Smith that he had a date with his wife at 1 p.m. and drove the pair down to the firehall under the guise of checking out the new ambulance.

She told her husband that she’d heard they were doing a dedication that day — but what she didn’t mention was that it was for him.

“He gets inside and of course there’s all the people and the ambulance and he just starts crying,” Darlene said. “On the side there’s a big ribbon that says ‘Dr. Doug Smith, the man who started it all.’”

But Smith, ever one to shy away from attention, is quick to turn that “I” into a “we.”

“There’s a place in the Bible that says, ‘Go forth and plant seeds,’” Smith said. “I planted the seeds, and they took off and grew. That’s the way that I look at it.”