Madison Chappuis goes up for a tough shot in the lane against the Lady Trojans Friday. (Jeremy Weber/Bigfork Eagle)

It was a big week for Bigfork High School’s basketball teams as the Vikings and Valkyries combined to go 4-0 with wins over Mission and Troy. The swimming team took sixth at the Butte Invitational and the wrestling team was on the road Saturday to face off against Class A Libby.

The Vikings had three scorers in double figures Thursday night as Bigfork held off a late Mission charge to earn a 61-59 victory in St. Ignatius.

Bryce Gillard scored 10 of his team-high 20 points in the fourth quarter and added seven rebounds as the Vikings held on to win a game they had led by double digits for most of the evening. Cormac Benn added 15 points in the win, Walker Fisher scored 11 and Isak Epperly finished with a team high in assists with five as the Vikings shot better than 60 percent from the field in the win, including 6-12 from beyond the three-point arc.

It was all Vikings Friday as the Bigfork squad cruised past the Trojans in Troy, 76-34.

All 10 Vikings players scored at least three points in the win as Fisher led the way with 13 points and Benn chipped in 10.

Bigfork again shot better than 60 percent from the field in the win, including 37 points off Trojan turnovers and 38 points in the paint. The Vikings also won the rebounding battle with 36 boards to Troy’s 19.

The Vikings were in action at Columbia Falls Tuesday evening after press time as they looked to add to their five-game winning streak. Bigfork will be at home against Eureka Thursday before traveling to Thompson Falls Saturday to face the Blue Hawks.

Emma Berreth put in a game-high 17 points and Madison Chappuis came close to a triple-double Thursday as the Valkyries picked up a 52-41 home win over Mission.

Berreth had six rebounds to go with her 17 points while Chappuis finished with nine points, 10 rebounds and seven assists.

The Valkyries had four players score in double figures Friday and Martinz finished with a double-double as Bigfork cruised past Troy, 67-9.

The Valkyries were in action against Columbia Falls Tuesday evening after press time and will be at Eureka Thursday before traveling to Thompson Falls Saturday to face the Lady Blue Hawks.

Sophi Logue had a pair of top-five finishes and Soraya Brevik was fifth in the 500 freestyle as the Valkyries took sixth place in the Butte Invitational last week.

Competing in the meet virtually from the Mission Valley Aquatic Center in Polson, the Valkyries had eight top-10 finishes.

The team will be in action in another virtual meet Friday.

The Vikings wrestling team saw their winning streak in duals come to an end Saturday against Class A Libby but still had a strong week as Angus Anderson and Patrick Wallen both went 2-0 while Ryder Nollan also picked up a pair of victories.

Wallen started his week with a win over Thompson Falls wrestler Eli Ratliffe in the 152-pound division Tuesday, pinning Ratliffe in 1:41. Wallen followed that win with another victory in Libby Saturday, bumping up to the 160-pound weight class to pin Joey Wise in 4:33.

The Vikings will be back in action Friday at the Whitefish Duals. 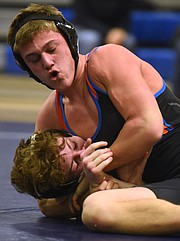