Madison Chappuis flies in for a shot over Stillwater's Madison Morken. Jeremy Weber

Emma Berreth goes up for a shot against Stillwater. Jeremy Weber

Madison Chappuis comes up with a steal against the Cougars Saturday. Jeremy Weber

The Valkyries put their new fast-paced offense on display Saturday as they opened the 2021 basketball season with a 52-30 home win over Stillwater Christian.

Emma Berreth led the Valkyries attack with 13 points and 10 rebounds as Bigfork scored 48 of its 52 points in the paint while outrebounding the Cougars 52 to 35. Nine Valkyries scored in the contest as Bigfork had 23 second-chance points and another 20 in transition.

“It was a good way to start the season. I was pleased with our transition offense, which I think will be one of our strengths this year, and I thought we did a great job rebounding, for the most part,” head coach Cortnee Gunlock said. “I thought we played great team ball and were very unselfish. We looked to really push the ball up the floor on rebounds, which is what we want to do. Our communication on both offense and defense was also pretty good.” 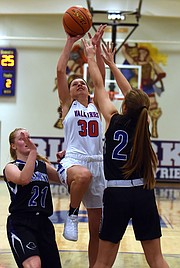 Bigfork opened the game on a quick 8-3 run to force a early Stillwater timeout before the Valkyries went on to build a 21-6 lead after one quarter of play.

Full-court pressure by the Cougars to open the second half helped Stillwater slightly cut into the Bigfork lead, but the Valkyries lead never dropped below 18 en route to the win.

Even with the win, Gunlock said her team has several things to work on before returning to action Thursday as they play in Troy before travelling to take on Deer Lodge Saturday.

“Our defense still needs some work as there were times when we were out of position and not quite sure where we were supposed to be in our zone,” she said. “It was good for our offense to get some work against a man-to-man defense, but we could use some work there as well.”

The Vikings jumped out to a commanding first-quarter lead at Stillwater Christian Saturday as Bigfork earned an 80-58 non-conference victory to open the season.

“It’s always nice to get that first win out of the way and see where you are at and what you need to work on,” head coach John Hollow said. “We had a lot of players seeing their first varsity minutes, so we expected some jitters. Overall, we did a good job of keeping our composure and doing what we wanted to do.”

Cormac Benn, Nick Walker and Isak Epperly each scored six points in the opening period as the Vikings stormed out to a 25-12 lead after eight minutes of play.

Emma Berreth goes up for a shot against Stillwater. Jeremy Weber

The Cougars cut the Bigfork lead to 9 at the half, but Walker Fisher connected on a pair of 3-pointers – and completed a 4-point play – as the Vikings lead ballooned to 63-39 heading into the fourth quarter.

Josh Venman scored a game-high 17 for Stillwater Christian while Blake Prewitt was also in double figures with 10 points.

Hollow said he was pleased with the win, but that his team still has a lot of work to do.

“Our defense has a long way to go to get better. We made a lot of mistakes that we should be able to fix down the road because we don’t want to be giving up 56 points every game,” he said.

Madison Chappuis comes up with a steal against the Cougars Saturday. Jeremy Weber

The Vikings will host their home opener Thursday as they take on Troy, beginning with junior varsity at 4 p.m. with the varsity set to follow at 5:30.

The Bigfork boys will be on the road Saturday as they take on the Wardens in Deer Lodge. 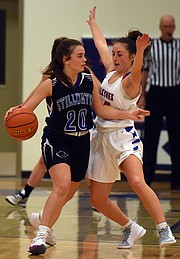