I don’t know about you, but I’ve had a difficult time finding beauty in things these past few weeks. Not all things, mind you. My wife and daughter of course are constant reminders that miracles do happen, conversations with friends and family mean far more now than ever before, and the blanket fort in our basement (where I like to hide from oncoming deadlines) has really become something to behold.

But as far as the stories taking place beyond the front door, I don’t know…the vibrance was starting to grow dim. There are probably a dozen reasons why: the shorter days of winter, the hangover of a holiday diet, the fatigue that comes with life in a pandemic, as a new parent, with so much uncertainty of what’s around the bend.

The longer I stewed on it, though, the more I came to accept two unequivocal truths: The first, that these pandemic prevention masks are simply marvelous at accentuating my double chin. The second, that the isolation of these past 11 months took me out of our story of place, and it was up to me to find my way back inside. The best way to do that, I supposed, was to go back to the beginning, where—as history so often reminds us—stories tend to start in the harshest of conditions before coursing freely, like water, through the millennia to come.

According to the National Park Service, the history of Glacier National Park begins more or less 1.6 billion years ago during the Proterozoic Era. During this time a large inland sea, the Belt Sea, covered most of the American Northwest. The sediments at the bottom of this sea ultimately solidified due to eons of heat and pressure, resulting in what are now the oldest exposed sedimentary rock in the entire Rocky Mountain chain. Life was extremely primitive on earth at this point, which is why the rocks of Glacier don’t contain many fossils.

Roughly 150 million years ago, tectonic plates started colliding, causing uplift, faulting, warping, and erosion which would ultimately form the Rocky Mountains. Then, a mere 2 million years ago, the Earth cooled and an ice age began. Throughout this ice age, vast glaciers advanced and retracted, shaping the dramatic mountains and valleys that we recognize and connect with today. 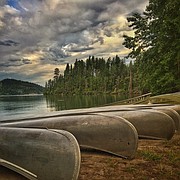 Canoes rest on the shore of Flathead Lake Courtesy photo

From 15,000 to 13,000 years ago, much of Western Montana was covered by a massive freshwater lake known as Glacial Lake Missoula. Periodically the immense ice dam that created the lake near the Montana-Idaho border would rupture, resulting in cataclysmic floods that swept across Washington and Oregon. These floods removed and transported huge amounts of Montana’s sediments, creating the fertile farmlands of Eastern Washington and the Willamette Valley in Oregon, and carving out the spectacular Columbia River Gorge. Eventually, things warmed, the glaciers receded back up into what is now Glacier National Park and adjacent mountain ranges, and our beloved Flathead watershed was born.

This is what we see when we look out our windows. A breathtaking backdrop, carved from eons of natural forces, set against the societal plotline of our present-day lives. These snow-capped peaks refracting in crystalline waters, the vibrant colors shimmering beneath the clear blue sky. The story of our watershed is 1.6 billion years in the making, and it continues today as a story about us. An epic tale of constant and dramatic change, driven by the poetic roles we’ll ultimately play in pivotal chapters not yet written.

In this new year, my resolution is to stop letting the story of our place pass me by. I want to dive back into its historic currents. I want to be reminded of the vibrant wonders of our watershed and the joy they bring to our everyday lives. I want to reconnect with the clarity of our water, and marvel at the inspiration coursing therein. I don’t know about you but that’s a story I hope we can all be a part of, because getting to that place will be a beautiful sight to see.