Bigfork is an extraordinary place where it’s easy to become infatuated, as if you were gazing at a beautiful painting — the azure blues of Flathead Lake, the swiftness of the Swan River below the Mission and Swan ranges and the quaintness of a stroll along Electric Avenue. But to truly fall in love with Bigfork, you need to see beneath the surface of the painting, into the stories of the people who first came upon this place, who built their homes and lives here.

You learn that there were once rows of Native American sweat lodges dotting the banks of the Swan River and newly-strung power lines running the length of aptly named Electric Avenue at a time when most homes in the nation were still illuminated with gas flames and coal oil lamps. There were soldiers returning home for Christmas during World War II, gleefully sliding down the icy spillway of the power plant on a Christmas tree.

As a volunteer with the Bigfork History Project, I hope to help bring these historic moments to life. Each month in this column, I will share the history and stories of Bigfork with the residents and visitors to our community, so that they too can fall in love with this extraordinary place.

The Bigfork History Project began in 2016 when a small team of local volunteers decided it was time to collect and share the story of Bigfork’s past. As older generations passed on, the town’s history began slipping away. With support from area citizens, we captured oral histories and stories from dozens of long-time residents, researched publications on local and state history and collected and archived nearly 1,000 historical images.

In 2017, we shared the fruits of our labors in the form of a full-length documentary film and companion book entitled, “BIGFORK: A Montana Story.” The proceeds benefit the Bigfork Art and Cultural Center and support continued efforts to archive and share the region’s history.

One of the recurring questions that comes up when examining our local history is: How did Bigfork get its name?

A number of names have been used to describe geographic features in the area where Bigfork was eventually founded. For example, the Swan River was referred to as the “Sweathouse River” by early trappers, based on the large number of indigenous ceremonial sweathouse lodges located along the river’s lower course.

In 1845, a Jesuit priest and noted mapmaker, by the name of Pierre-Jean DeSmet, traveled to Flathead Lake and drew one of the first recorded maps of the area with the help of the local indigenous people. In DeSmet’s map, Swan Lake was called Lac Hughes after Bishop Hughes, and Flathead Lake was called “le grande lac tete plate” or the Large Flat Head Lake. DeSmet’s map clearly depicts a large fork in the location where two rivers (Flathead and Swan) flow into the north end of the lake. That fork in the rivers may have inspired the name Bigfork, the moniker used when the township was officially founded by Everit and Lizzie Sliter on May 17, 1902. However, there are also tales that Bigfork was named in honor of a Minnesota community with the same name or that “Bigfork” evolved from the Salish language.

While the exact origin remains unknown, it seems most likely that the large fork in the rivers gave Bigfork its name.

Sometimes the simplest explanation isn’t all that exciting, but it works, and sometimes is even better — nothing fancy, just a beautiful place where two rivers come together. 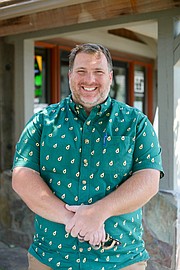 Kyle Stetler is a board member of the Bigfork Art and Cultural Center and volunteer with the Bigfork History Project. To get involved, call (406) 837-6927 or visit www.bigforkhistorynetwork.org. See the permanent exhibit at the BACC, located at 525 Electric Ave. in Bigfork.