Cans for cash — and a cause

Toot Sward and her son, TJ Sward, are pictured at their Kalispell home. TJ, formerly of Bigfork, has been collecting cans for years and recently donated the proceeds to All Mosta Ranch in Marion.

TJ Sward, formerly of Bigfork, has been collecting cans for years and recently donated the proceeds to All Mosta Ranch in Marion.

For the past four years, Bigfork High School graduate TJ Sward has been on a can-collecting mission. But at first, Sward’s recycling project was a small endeavour.

Once neighbor Lanelle Smith learned of TJ’s affinity for recyclables, she gifted him a can crusher and whenever she had a load Coca-Cola cans and water bottles ready, she’d give the Swards a call and he’d truck down the street with his wagon in tow to retrieve them.

TJ Sward, 27, and his twin brother, Brett were born three months prematurely and Sward lives with a learning disability that makes reading and writing difficult. But he thrives in other areas and is, as his mother Toot describes him, “the happiest human being on the planet.”

When word got out in the Eagle Bend neighborhood about TJ’s collection efforts, cans began showing up by the bag-full.

Often, they’d arrive home after picking TJ up from work at Flathead Lake Lodge to find bags of cans at their doorstep. The Lodge got wind of what he was up to and pitched in too, as did a family friend who happened to own a bar. It was a recycling jackpot.

“We were getting these enormous bags of cans and we thought we should use this opportunity to do something with them,” Toot Sward explained.

TJ Sward is a big fan of animals, so when the family learned about the mission of All Mosta Ranch in Marion, they knew they had found their beneficiary. The ranch is a non-profit, animal rescue organization that takes in abused, displaced or unwanted farm animals. The Swards decided they would continue accumulating cans and pop tabs with the goal of donating their proceeds to support All Mosta Ranch.

TJ collected the recyclables and exchanged them for a modest sum at Pacific Steel and Recycling in Kalispell. A pound of aluminum cans goes for 40 cents and their accompanying pop tabs, for slightly less.

They began acquiring so many cans that Toot and TJ began making two trips each month to the recycling center. On the rare occasion that Toot would show up sans TJ, employee James Burkett would ask after him wondering, “Where’s the boy?” 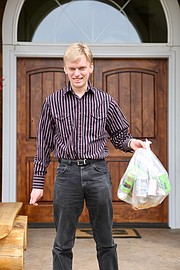 TJ Sward, formerly of Bigfork, has been collecting cans for years and recently donated the proceeds to All Mosta Ranch in Marion.

They grew relationships, in addition to funds for the ranch over the course of the project.

Each trip averaged 4 to 5 pounds of aluminum cans, however if they had a load from their friend’s bar, it could mean up to 20 pounds-worth.

In late May of this year, Toot and TJ mailed off a $500 donation to the All Mosta Ranch -- half of which came from TJ’s recycling while the other portion was matched by the Sward family. It marked the end of their can collecting project, which was possible not only through TJ’s consistent efforts, but thanks to half a dozen friends and neighbors who donated their cans for the cause. TJ and Toot still plan on collecting pop tabs — not with any fundraising mission at heart — but as an excuse to keep in touch with the people they’ve gotten to know along the way.

“It’s been really rewarding,” Toot said. “People know TJ has such a good heart and he inspires other people to think about doing the same thing.”