On May 17, 1934, the inaugural meeting of the Ferndale Sewing Society took place. A group of local women assembled with a shared mission to “do all the good we can in all the ways we can to as many as we can,” according to meeting minutes. They wanted an opportunity for socialization, and for many, a break from their housewifely duties. But first and foremost, they came together in support of Ferndale.

These founding members utilized their skill with needle and thread to craft colorful quilts, which they raffled off and then donated the proceeds to various local organizations. Their good work continues to this day making the now-called Ferndale Sewing Circle the longest-running organization of its kind in the state.

“The most rewarding part of being in this club is the companionship, the friendships you develop,” said club vice president Danae Shaner. “And the root of it — everything you do within the club gives back to the community.”

In the early days of the circle, the group was focused on supporting the church, or rather a local minister who visited the area periodically to conduct services. As time went on, the group’s mission became less tied to religion and more focused on supporting community infrastructure like the local school and volunteer fire department, said member Beverly Ostroot.

Early projects included contributions to the Red Cross, flowers for the sick and Christmas treats for people of all ages, according to a 1994 Bigfork Eagle article.

They raised money through bazaars -- selling handmade quilts and embroidery -- and themed teas hosted at various members’ homes. The Whitney family donated a parcel of land to the club on which they constructed what is now the Ferndale Community Center. The only payment exchanged were a few quilts made by club members, Ostroot said. From the get-go, the circle has strived to run a simple yet focused operation -- at one point, they voted to eliminate singing from their club meetings and enacted a rule that meeting luncheons would consist of no more than three items.

“The women that attended were the housewives ... It was an opportunity for them to socialize and get a break from their usual duties,” Ostroot explained.

“People who are attending now are the retired women — and there are a few younger women who have jobs that are more flexible.”

Club meetings take place on the first Thursday of the month and the ladies reconvene the following Thursday for a craft-focused gathering where they’ll typically bring personal projects to work on or observe a demonstration on a certain technique. The circle is accepting new members of all ages and experience levels and no dues are required to participate. While the demographics of the group has fluctuated over time, their mission remains the same. 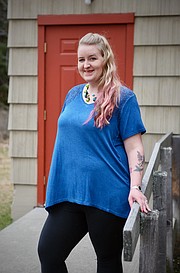 “If people in the community are in need, we have helped them,” said former club president Ginny Sharr. “It’s a blessing to help.”

Members also take pride in passing on their knowledge to the next generation, whether that be sharing local history, gardening tips or treasured family recipes, like Neta Stilkey’s banana walnut cake.

“I’ve learned how to cook and bake all types of dishes that I probably wouldn’t have ever been exposed to if not for this club,” Shaner noted.

Last year, the club donated approximately $1,000 split between organizations including the Bigfork Food Bank, Shodair Children’s Hospital and Energy Share of Montana. The current members, which number roughly a dozen, primarily bake rather than quilt as a means of raising funds. They host three events annually: a Father’s Day bake sale, a Pie and Bingo Social in November and, just on the horizon, their annual Easter bake sale.

The Easter sale will be held from 10 a.m. to 1 p.m. this Saturday, April 3 at the Ferndale Community Center. In addition to sweet treats like huckleberry and apple pies, the club will also offer savory items such as beer bread and dinner rolls.

“We’re pretty excited about the April bake sale. We get to raise some money and see people haven’t seen in a while,” Shaner said. “All of the hard work that we put into our pie and bingo, the bake sales and the quilts that we put together for raffling, that all gets redistributed within the community. And that’s a great thing to be a part of. … There’s nothing more rewarding than helping other people.”

Editor Mackenzie Reiss may be reached at editor@bigforkeagle.com or 758-4433.