Korbin in front of one of the 4-H cabins

14-year-old Korbin Baldwin from Whitefish has worked very hard to become an Eagle Scout-- the highest rank you can achieve in the Scouts. He is one large step closer to achieving that rank after organizing an effort to stain cabins at the Darrell Fenner 4-H Camp in Bigfork this past month. Baldwin is also a member of 4-H, and he said he got the idea to stain the cabins at Montana’s only overnight 4-H camp while on a walk around the area.

“These cabins hadn’t been stained for like 20 years and they were in the process of fixing the camp because it hasn’t been running for like a year and a half. So, I’m from 4-H and I’m from the Boy Scouts, so I just put two-and-two together, and I was like, I have an Eagle Scout project coming up, maybe we can stain these cabins,” Baldwin said.

To spread the word, Baldwin said he went around to other local Boy Scout troops asking for support, and got to give a short speech at Flathead County’s 4-H award ceremony where he believes he garnered most of his volunteers. Baldwin said around 45 people came out to help the effort in staining 11 cabins. He said it took the group 75 gallons of stain, which was one of many things donated to the project by local businesses.

“It took a long time...I already had 40 service hours just preparing for the project,” Baldwin said.

Among these businesses are Lowes, Home Depot, Western Building Company, Sliters Lumber and Building Supplies, Ace Hardwares, Big Sky Rentals, Midway Rentals and Super One-- which donated lunch for the volunteers. Baldwin said they had everything for the project donated, from the brushes and rollers for the paint to the pressure washer used to wash the cabins before they applied the stain.

The preparation paid off, and Baldwin said the group was able to finish 9 cabins on the first day of work, with about 20 people returning the next day to finish up the last two cabins ahead of schedule. Baldwin said lots of volunteers made the work go by faster and easier, but there’s another reason why community projects like these are important.

“It’s just nice when all the community comes together,” he said. “When we’d be on lunch breaks, you know, everybody is just all together and was just a fun time, and it was also the people who use that camp putting in the work, so they just know how much work goes into that camp,”

He said he’s done a lot of other projects for the Scouts, like trail maintenance and volunteering at local homeless shelters, but this was the first one where he was in a main leadership position. And for the 14-year-old, the achievement of becoming an Eagle Scout is worth a lot more than the medal they give out.

“One thing is that you can get a lot of scholarships for college, and another is if you put that on a job application, whoever is hiring me will look and know the leadership and how hard you have to work to be able to get that,” he said. “Once you’re an Eagle Scout, you’re just trusted more by other people. Like, when you make a new friend and you tell their parents ‘I’m an Eagle Scout,’ they’ll say, ‘hey, that’s a good friend you have,”

Baldwin said he wants to say thank you to those who came out and helped him finish the project.

“I wouldn’t have been able to do it without them, I mean, 11 cabins with me and my mom? That would have been a struggle in a weekend,” Baldwin said. “I really appreciate all of the help.” 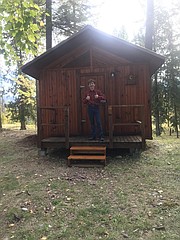 Korbin in front of one of the 4-H cabins 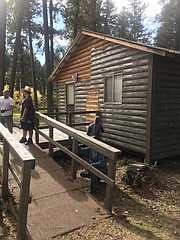 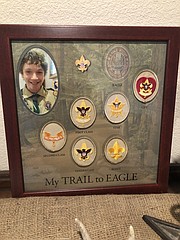