Braeden Gunlock touches down during the long jump at the Dilly Bar Meet in Ronan Saturday. (Scot Heisel/Lake County Leader)

Jack Jensen runs to a first-place finish in the 1,600 meter race at the Dilly Bar Meet in Ronan Saturday. (Scot Heisel/Lake County Leader)

The Vikings and Valkyries track teams picked up another pair of convincing wins in Ronan Saturday, both taking first place at the annual Dilly Bar Meet.

The Vikings earned the top spot in nine of the meet’s 16 events and were in the top three in 13 of them as the Bigfork Boys compiled 208 team points to finish far ahead of second-place Mission’s 80. Charlo was in third at 64 points.

The Vikings used a true team effort to win the meet, getting individual first-place finishes from eight different athletes along with a victory in the 4X100 meter relay.

The 400-meter relay team of Jackson Abney, Trevor Hill, Bucklin and Farrier took first in their event with a time of 45.64 seconds while the team of Herd, Peterson, Maddox Mater and Wyatt Johnson took second.

Along with Peterson’s PR in the triple jump, Wyatt Barnes took second in the event and Taylor was third.

The Valkyries earned first in eight of 16 events, including taking the top two spots in seven of them, as they compiled 193.5 points to outpace second-place Ronan, which finished with 11.5.

The Valkyries also spread out their victories, with seven different athletes earning individual top finishes along with a win from the 400-meter relay team.

Lilly Tanko took first in the 100 hurdles with a new PR of 16.84 seconds while Inga Turner also set a PR of 17.71 seconds to take second.

Turner was first in the high jump as she cleared 4 feet, 10 inches while Braeden Gunlock was second at 4 feet, 6 inches.

Emma Pouwers set a PR of 15 feet, 6 inches to win the long jump while Gunlock and Ayers tied for second at 15 feet, 2 inches, also a PR for both athletes.

The 400 meter relay team of Danika Bucklin, Tanko, Raats and Lambrecht won their race with a time of 52.11 seconds while Ayers, Turner, Coralyn Shillam and Ellie Jordt were second at 53.61 seconds.

Both squads are scheduled to be back in action Saturday at the Seeley-Swan Invitational. 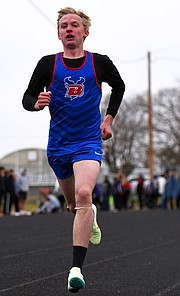 Jack Jensen runs to a first-place finish in the 1,600 meter race at the Dilly Bar Meet in Ronan Saturday. (Scot Heisel/Lake County Leader)