Exterior of the Bigfork Summer Playhouse during the first summer of 1960. (Collection of Firman “Bo” Brown)

Patrons leaving after a performance sometime in the mid-1960s. (Collection of Firman “Bo” Brown)

Since 1960, one of Bigfork’s main attractions, arguably bringing in thousands of people each summer, is the Bigfork Summer Playhouse. The humble beginnings can be traced back to Bo Brown and his wife Margery who recognized the wave of revived community theaters spreading across America in the 1950s and even though “Montana was somewhat behind” the rest of the country, they figured there was an audience for live theater here as well.

After getting his PhD from the University of Wisconsin, Bo joined the faculty at the University of Montana in Missoula where he soon established the master summer theater. But he was anxious to bring community theater to more of the state, so he and Margery began the search for a perfect site and eventually picked Bigfork. That was only part of the battle, however, and with the help of the first dozen or so company of players, they scoured the state for risers and old theater seats that they could repurpose for their Bigfork venue.

It was an all-hands-on deck operation in the early days as Bo recalls. For example, in the back of the Rebekah Legion Hall was a kitchen that was used to feed all the cast and volunteers prior to each performance. The performers would then wash all the dishes, clear everything away, then head to the front of the hall to sell tickets and usher people to their seats. And the industriousness didn’t stop there. Because the hall was available to the rest of the community, all the seats and risers had to be installed and then removed for each theater season. While that first season of 1960 only ran from August to September “for some reason we had an amazing number of people” according to Bo. In addition to creating something for the community, Blakely Brown, Bo and Margery’s daughter, remembers with fondness how lucky they were to grow up each summer with the playhouse. “The great thing for us about the playhouse is we got to spend out summers, every summer, during those years, on Flathead Lake.”

By the late 1980s it was evident that the old hall had become worn out and no longer suitable for the playhouse’s needs. When faced with the prospect of losing the by then almost 30-year institution, however, Bigfork rose to the occasion and with help from the entire valley, 32 states, and six countries, fundraised over $750,000 for a new facility. The old building was demolished on September 1, 1987, and by May 1988, the new Bigfork Center for the Performing Arts welcomed its first patrons, and it has continued to do so for 34 years.

And perhaps one of the more amazing facts about the playhouse is that while the Browns managed the playhouse from 1960 to 1968, since then, only one other family, Don and Jude Thomson as well as their son Brach, have been the driving force behind the playhouse. As such, anytime you stop in you are likely to see one or all three of them. Talk about history being alive and in tune!

The Bigfork History Project can be found at the Bigfork Art and Cultural Center. 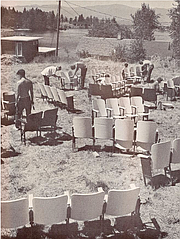 Patrons leaving after a performance sometime in the mid-1960s. (Collection of Firman “Bo” Brown)