It’s Christmas in July with Leslie Budewitz’s new culinary cozy mystery, “Peppermint Barked” to be released July 19. The Ferndale author has cooked up the sixth installment in her Spice Shop Mystery series.

Sizzling with holiday suspense, “Peppermint Barked” is the perfect blend of comfort and crime.

As the holiday season lights up Seattle’s famed Pike Place Market, Pepper Reece’s beloved Spice Shop is brimming with cinnamon, nutmeg and shoppers eager to stuff their stockings. Add a tasty staff competition — a peppermint bark-off — along with Victorian costumes for this year’s Dickensian Christmas theme, and Pepper almost forgets to be nervous about meeting her fisherman boyfriend’s brother for the first time.

But when a young woman working in her friend Vinny’s wine shop is brutally assaulted, costumed revelers and holiday cheer are the last things on Pepper’s mind. Who would want to hurt Beth? Or were they looking for Vinny instead?

The vicious attack upsets everyone at Pike Place, but none more than Pepper’s employee, Matt Kemp. At first, Pepper is baffled by his reaction, but his clandestine connection to Beth could hold the key to the assailant’s motive. Or perhaps it’s Vinny’s ex-wife who knows more than she’s letting on … and what about the mysterious top-hatted man with whom Pepper saw Beth arguing that morning?

As the secrets of the market come to light, long-held grudges, family ties and hidden plans only further obscure the truth. As Pepper chases down a killer, someone is chasing her and, in the end, the storied market itself may hold the final, deadly clue.

The Daily Inter Lake caught up with Budewitz last month, just as she was laying out the draft for what will be the seventh novel in her popular mystery series.

Budewitz, a Billings native, has lived just off the Swan Highway in Ferndale for the last 22 years where she practiced law full time from 1992 to 2016. A graduate of Seattle University and Notre Dame Law School, Budewitz previously practiced law in Seattle for a number of years.

“I’m hoping to make it back to Seattle this fall,” Budewitz said. “Part of the reason for going is to do book events and connect with friends, and a big part is to do research … and by research, of course, I mean eat.”

Budewitz’s love of food took root when she moved to Seattle in 1977 as a college freshman just as Pike’s Place Market was undergoing a resurgence. She would frequent the Market and often walk down to Market Spice to get a free sample of tea.

“I started getting intrigued by the spices,” she said. “Years later when I came back to Seattle as a young lawyer, I had a downtown office and had lunch in the market at least once a week, and did a lot of my grocery shopping in the market. It was a trigger for me to learn much more about food and cooking.”

Budewitz began her Spice Shop Mystery series in 2015 with “Assault and Pepper.” The series main character Pepper Reece, reeling from a divorce and losing her job at a law firm, decides to make a fresh start and opens the Seattle Spice Shop in Seattle’s Pike Place Market.

“In the last seven years, Pepper’s character has evolved in her confidence in herself both in retail and personal relationships,” Budewitz said. “Pepper said of those years that her life exploded so she sought ‘Solace in Bay Leaves.’” — not coincidentally the title of the fifth book in the series.

“In her personal life, after a couple of disastrous relationships, Pepper meets the fisherman Nate Seward,” Budewitz said. “And by now in ‘Peppermint Barked’ things are pretty smooth, she’s confident, they’re solid.”

“Writing the culinary cozies has required me to do a lot of research and cooking … and eating,” Budewitz said, chuckling. Her books also feature elevated recipes.

The local author also blogs with a group of a dozen other foodie cozy writers called “Mystery Lovers Kitchen — Mystery Writers Cooking Up Crime and Recipes.” She’s also on the board of the Mystery Writers of America and was president of Sisters in Crime National in 2015-16, having been a member of both organizations for 25 years.

“The original goal of that organization was to promote women crime writers at a time when women were far less likely to get their books reviewed,” Budewitz said. “Even though they were publishing as much as men, men were getting seven times the number of reviews.”

She says it was important to her to get involved with the national organizations because she was relatively isolated in Northwest Montana in those pre-internet days.

As far as whether Budewitz has a final novel planned for her Spice Shop Mystery series she says she doesn’t.

Series and one short story collection set in Jewel Bay, a fictional version of Bigfork.

“Montana has always had a mystique and I love playing that up,” she said. “It’s such a special place. I believe the place we live influences our experiences of life, and relationships to place influences our actions.”

While at this point, Budewitz doesn’t have any plans for additional novels in that series, in April 2021 she published a new suspense thriller titled “Bitterroot Lake” under the pen name Alicia Beckman. Beckman’s next novel “Blind Faith” will be released this October.

“The publisher wanted me to create another name for these moodier, slightly darker suspense novels to distinguish from my lighter, cozier novels,” she said. “The name honors my mother and grandmother.”

A three-time winner of the national Agatha Award, Budewitz’s advice to aspiring local writers is to take writing classes at Flathead Valley Community College and visit the local Authors of the Flathead meetings.

As far as advice to aspiring writers she says, “Read. Read. Read. Analyze what you read. Then put your backside in the chair.”

A talk with Ferndale author Leslie Budewitz and book launch party for “Peppermint Barked,” the latest novel in her “Spice Shop Mystery Series, will take place from 12:30 to 2 p.m. Saturday July 23, at the Bigfork Art & Cultural Center. 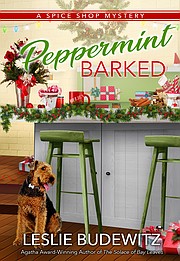