The Bigfork Summer Playhouse opened for their 63rd season this past weekend with a production of the award-winning classic "Guys and Dolls." Their production of "Mamma Mia!" opens tonight, June 8.

A release from the Bigfork Summer Playhouse said "Guys and Dolls" is an oddball romantic comedy that is set in Damon Runyon's mythical, almost cartoonish, 1940s New York City. Gambler, Nathan Detroit, tries to find the cash to set up the biggest craps game in town while the authorities breathe down his neck; meanwhile, his girlfriend and nightclub performer, Adelaide, laments that they've been engaged for fourteen years. Nathan turns to fellow gambler, Sky Masterson, for the dough, and Sky ends up chasing the straight-laced missionary, Sarah Brown, as part of the deal.

"The production stars a tremendous cast of professionals assembled by the Bigfork Summer Playhouse from all over the country. The other star of the show is the incredible music," Director Scott Seidl said. "This is one of those something for everyone kind of shows. Silly comedy, colorful costumes and scenery, plus incredible song and dance."

After watching the opening of "Mamma Mia!" on Broadway, New York Times critic Ben Brantley referred to the show as the "theatrical equivalent of comfort food," and much needed, as the musical opened just six weeks after the 9/11 terrorist attacks. "Mamma Mia’s" plot is compelling, with love stories we’re rooting for. But ultimately, it’s the songs we know and love that drive the evening. It’s ABBA’s greatest hits live on stage, and for those of us that smile when Dancing Queen comes on the radio, "Mamma Mia!" is a heaping spoonful of comfort food.

Check out BSP's productions of "Freaky Friday" and "The Full Monty" later on this summer, beginning in July, as well as the Playhouse's "The Hits of the 50's, 60's and 70's" and "Broadway in Love."

A benefit revue show will take place on July 24 to raise funds for the Bigfork Summer Playhouse Scholarship Fund. Each year BSP gives out five or more, $1000 plus scholarships to deserving company members to help them finish their education. Scholarships are applied directly to the school of their choice and are awarded to actors, directors, designers, musicians or technicians.

To check out show times or purchase tickets, go to www.bigforksummerplayhouse.com or call 406-837-4886. 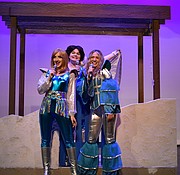