Bigfork: An Amazing Place to Grow Up

Some of the Elrod frog catchers pause for a quick picture. (Mansfield Library)

The young Pete and Elmer Sprunger (on right) during the early days of Bigfork. (Collection of Jerry Sprunger)

School photo from 1929. The school was located on the corner of Commerce Street and Grand Ave. where the public tennis courts are located today. (photo provided)

Young Rand Robbin in front of Robbin's mercantile store in Bigfork with a Dolly Varden trout. (Collection of Rand Robbin)

Compared to many of the cities of the world, or even the western United States, Bigfork, in the big picture, is still a young place at only 121 years old. One of things that has made Bigfork such an amazing, vibrant village has been the children and young ones that contributed, and continue to contribute, to its character. This was only reinforced by some of the wonderful stories that emerged when the documentary Bigfork: A Montana Story was being created by Ed Gillenwater, Denny Kellogg, and Tabby Ivy. The Bigfork Arts and Cultural Center, who support the Bigfork History Project, has also been active in supporting this tradition by continually developing new programming for children and over the next couple of weeks hosting a Bigfork Young Artists show. Below are just a few of some of the stories that show the unique perspective that children have, especially in a new town in the early 20th century.

Perhaps the first set of kids to make a name for themselves were “Elrod’s Frog Catchers”. The article this past August noted that the Flathead Biological Station, under the direction of Dr. Morton Elrod was located in Bigfork itself from 1899 to 1909. During that time Dr. Elrod and his students employed the local children to assist with the collection of specimens. Little did these young Bigfork residents know the small but helpful role they were lending to a renowned American naturalist.

Bigfork also attracted several colorful characters. During the early days of Bigfork one of the new residents, relocated from West Virginia, was George Benton McClellan also known as G.B.M. Hart. He was so big, and tall, however, that the local kids reappropriated his initials to stand for “Great Big Man”. Perspective is everything. On top of that, his laugh was noted as being so jovial that the movie theater gave him free tickets because he kept the other patrons in such good spirits.

Bigfork has also had a prominent place for its schools, even though school didn’t stop “Potato Week” in the early years, according to Carrie Weed Wade in 1918. She noted that the children that lived in the country were expected to help pick potatoes and the kids in town usually did the same. The first school was created the same year Bigfork was founded, 1901, but located in the Cheeney home, halfway up the hill on what is today’s Grand Avenue. The first official school was built in 1912, followed by a high school in about 1934, all on land donated by Everit Sliter. Prior to that, however, formal education ended at the 8th grade and anyone wanting to continue school went into Kalispell.

Bigfork resident Bud Robinson also spoke in the documentary about getting a job hauling cord wood for not only the school but the hotel as well. When the school and hotel both converted to oil Bud found himself unemployed. Being an industrious youth though Bud also pumped gas at the service station as well.

Finally, one of the things many of the people interviewed remember the most about growing up in Bigfork, as do likely many of today’s children, is the beauty and many outdoor opportunities. Mary Sullivan remembers floating the Swan River, as soon as it was warm enough, and Darrel Coverdell recounted many mountain ice fishing trips with his father, particularly to Birch Lake.

So many experiences for such a small little town make it easy to see how these memories obviously left a lasting impact on the many people that grew up in Bigfork. As was noted in the documentary book; “in part, that’s why Bigfork it not a typical resort experience; it’s more like coming back to the hometown you always wish you had….” 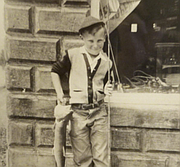 Young Rand Robbin in front of Robbin's mercantile store in Bigfork with a Dolly Varden trout. (Collection of Rand Robbin)

School photo from 1929. The school was located on the corner of Commerce Street and Grand Ave. where the public tennis courts are located today. (photo provided) 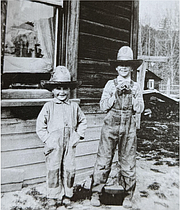 The young Pete and Elmer Sprunger (on right) during the early days of Bigfork. (Collection of Jerry Sprunger)