“People Crossed in Many Ways” – The Ferries of Bigfork

Holt Ferry looking south across Flathead River to Holt (near Bigfork, MT) ca 1920s before the ferry was electrified. (Collection of Denny Kellogg)

View of Holt Ferry on Flathead River, looking east. Holt Saloon and Dance Hall visible to left of road on far side of river. Date unknown--estimated to be around 1900 to 1910. (Whitney Family Collection)

These days we probably don’t give a second thought to zipping over the Flathead River on Sportsman’s Bridge, or perhaps to the north on the Highway 35 bridge. But for centuries, or perhaps longer, the river has created a stark east-west divide as it widely braids itself from the mouth of Bad Rock canyon in the north to the top of Flathead Lake in the south. Author C.F. O’Neil noted that residents in the late 19th and early 20th century, found that “getting to the east side was a challenge, because the Flathead River, though not rushing, was wide and deep—in places up to 100 feet in depth…they swam their horses across, a very risky undertaking…people crossed in many ways—in Indian dugouts, in tiny boats, canoes and anything that seemed to occur to them.” As many of the new arrivals were looking at establishing business, farms, and other forms of commerce, crossing the river then posed a very constant and, in the spring, evolving challenge.

The first known river ferry crossing was built in 1883 by Willian Egan. It was described as a heavy, cumbersome craft made of hand-hewn logs fastened together with wooden pins and powered by long sweeping oars. Two years later, French-Canadian immigrant Henry Therriault built a store, blacksmith shop, hotel, and then a ferry crossing that would soon become a favorite stopping point for the steamboats that by then were plying the river. The Therriault ferry site was located several miles to the south of the Egan ferry site, however, it would still be a full day’s wagon ride over 6 miles of rough terrain to the area that would eventually become Bigfork.

But just about that same time, in 1885, Alvin Lee was setting up his homestead at the north end of Flathead Lake. By either luck or design, Mr. Lee had picked a particularly good bend in the river and soon decided to build a ferry to serve future settlers. As one was apt to do at that time, he called the site Lee’s Landing. A young Frank Linderman was a neighbor of Mr. Lee and offered to help get the ferry started…. “he told me he intended building a new shack by the stream and that he would operate a ferry on the river… This offered me an opportunity. I knew boats, having been around them all my life, so I helped him build his new cabin and run his ferry…the first boat being a raft of logs.” Lee’s Landing would eventually develop into the town of Holt and was pivotal as it was the first town offering access into the Swan Valley.

Finally, closer to Bigfork itself, right around that same time, trapper George Marshall Lakin arrived. Mr. Lakin wasn’t messing around either when it came to settling down and in short order started the first fruit orchard and, not to be outdone by others, built a ferry across the Swan River downstream of the current steel bridge. It is important to remember that since the lake was still roughly 10 feet lower year-round at that time, Bigfork Bay wasn’t quite a bay yet. The ferry was also critical because it linked the Flathead valley with an early trail blazed along the east shore of Flathead Lake. Alas, the ferries only had their heyday for just about 20 years before reliable bridges made their appearance at different points both in Bigfork and the rest of the valley. Nonetheless, they served their purpose and allowed people and material, for the first time, to safely cross the river, thereby not having to use “anything that seemed to occur to them.”

The Bigfork History Project is displayed at the Bigfork Art and Cultural Center. 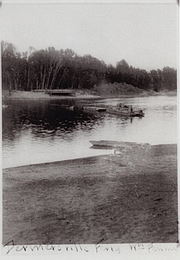 View of Holt Ferry on Flathead River, looking east. Holt Saloon and Dance Hall visible to left of road on far side of river. Date unknown--estimated to be around 1900 to 1910. (Whitney Family Collection)