A group of women from the Alpine Spinners and Weavers Guild celebrate international "Spin Outside in Public" day at Fiber in Bigfork. (Photo provided)

A wall of colorful yarn at Fiber in Bigfork. (Taylor Inman/Bigfork Eagle)

A new yarn shop in Bigfork is looking to bring together a community of knitters, weavers and sewers to teach new generations about the ancient art of making clothes.

Fiber owner Cindy Ruprecht said a hobby she decided to take up during her pregnancy has now turned into a lifelong love of fiber arts. She wanted to learn how to knit to make her daughter baby clothes, but after her birth she kept exploring and learning. She said she got to a point in her life where she was seeking something more creative and fulfilling, so she opened her first yarn shop in Twisp, Washington in 2019. After battling through the early days of the pandemic and some tough fire seasons, she decided to move to a place that had a bigger population base.

Now she operates Fiber out of a historic cabin on the main drag coming into Bigfork. Recently, Ruprecht said she’s begun to learn spinning and how to process different kinds of wool. She has been working to connect with knitting and spinning groups, including members of the Alpine Spinners and Weavers Guild, who decided to celebrate worldwide “Spin outside in public” day at her shop.

“We had some ladies from the guild out front spinning so people could see us, because it reminded them, ‘oh, what is that?’ and then they got curious. They’d come in, talk and ask questions. Because we all kind of forget and take for granted where our clothing comes from. We have machines that do it, but it is an ancient tradition that needs to be kept alive,” Ruprecht said.

Her building has a lot of local history too. The two story cabin used to be the Swan Valley Lodge, a popular destination for honeymooners near Swan Lake up until the 1970s. She said powerlines had to be moved for the building to make its way to where it sits now off Highway 35. She’s interested in finding old photos of the building to display in the shop and learning more about its history.

Along with the building’s age came the need to make many repairs and renovations, and after a lot of hard work, Ruprecht opened her doors in August. She said the second floor of the building is about to become a classroom space to learn about all different kinds of knitting and weaving techniques. These classes will include learning how to block knits, how to make socks, a ‘first hat’ class, a cable knit hat class, and around Christmastime they’ll teach how to knit little stuffed gnomes. These classes start in October. Ruprecht said as people show up and have an interest in teaching a class they will continue to build on that aspect of Fiber.

“It's a great space, it's big and open and you know, that's why I named ‘Fiber’ because I didn't want it to be just yarn and knitting, I wanted it to be more encompassing. That includes dyeing, like plant dyes— that's a whole fun world of dyeing with plants … and that's just one part of the process of fiber,” Ruprecht said.

Her shop is filled with many different types of yarns from all over the world, including some as local as Bigfork and as far away as Peru. She said she likes to source wool and yarn from farmers in Montana and surrounding states.

“Supporting local and keeping farmers alive, a lot of these farmers produce wool and meat at the same time … And sheep are great because they're not a heavy animal and so you can rotate them and so it is much more sustainable and regenerative to the land,” Ruprecht said.

Also available in her shop are books on knitting and spinning, and a plethora of knitting, embroidery, and felting supplies. She is also an authorized Ashford and Schacht spinning wheel dealer. She said she believes knitting and learning more about sewing and spinning is a lifelong passion project for many people. Though it may seem difficult at first, the art and the skills associated were once second nature to people in the past who depended on it to make their clothes.

“It's fulfilling, it's creative, it's tactile— people get great enjoyment and relaxation out of doing it. And it's skills that we just need to keep bringing forward into the future with us instead of forgetting about them and how to do them. It's something that we can pass onto the next generation,” Ruprecht said.

Information about upcoming classes and new products can be seen on Fiber’s website and its social media pages.

A wall of colorful yarn at Fiber in Bigfork. (Taylor Inman/Bigfork Eagle) 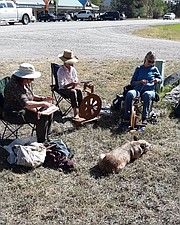 A group of women from the Alpine Spinners and Weavers Guild celebrate international "Spin Outside in Public" day at Fiber in Bigfork. (Photo provided)